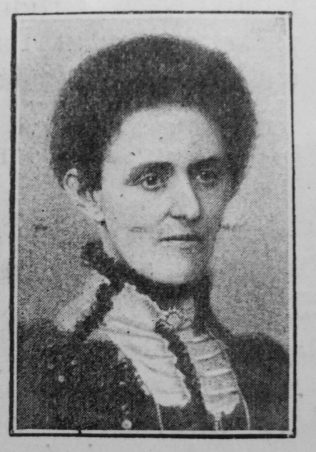 Transcription of Obituary in the Primitive Methodist Magazine by H. Ross

Hartley Road Church and Primitive Methodism in Nottingham has suffered a severe loss in the death of our beloved sister, which took place after a very brief illness on December 26th, 1906. Born in Leicester in 1855 she was converted to God when but eleven years of age, and became a member of the first catechumen class formed in connection with the George Street Chapel in that town.

Her marriage with Mr. Mosley only led to the strengthening of the ties that bound her to the church, and when it became necessary for them to remove from Leicester to Nottingham, they very speedily found a sphere of useful service in connection with Forest Road Church and school. The commencement of the cause at Hartley Road offered an opportunity for zealous and self-denying work for God, which was gladly embraced. Open air mission work, visitation, social service of varied kinds, never called in vain. Several former ministers have testified to the esteem in which they held her.

Hospitable, generous to a fault, wholehearted and earnest, gracious with a sweetness and sincerity which gave an added charm to a winning personality, Mrs. Mosley made many friends and delighted in nothing more than serving those who served her Master and His Church.

The funeral took place at the General Cemetery, Nottingham, Revs. W.S. Spencer, J. Waggott, G.G. Martindale, J.T. Goodacre, and H. Ross taking part therein. A memorial service held at Hartley Road Church on Sunday, January 6th, testified as no words could have done to the sincerity and extent of the respect in which she was held. The church was crowded with those who knew and loved our sainted friend. Deep and fervent were the prayers they offered that the sons and daughters left behind might, with the bereaved husband, find the comfort wherewith we are comforted of God.

Sarah was born in 1855 at Leicester, Leicestershire, to parents David Gunn, a framework knitter, and Ann Goddard.

The 1871 census records Sarah working as a cigar maker.