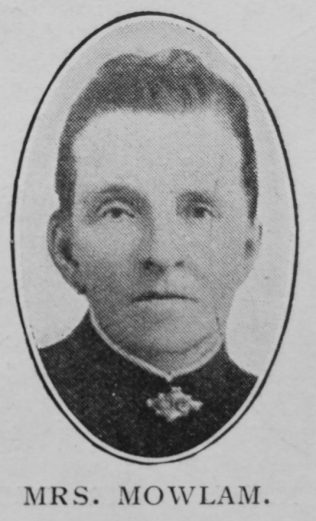 Transcription of obituary published in the Primitive Methodist Magazine by A.E.G.

The church at St. Peter’s Street, Cambridge, sustained a serious loss when, on May 26th last, Mrs. Mowlam was called away. Julia Mowlam was born at Brampton, Hunts, in January, 1850, and came, when still quite young, to reside in Cambridge. She began to attend St. Peter’s Street Chapel, and, yielding herself to Christ, became a member of the church. Her first-class ticket, which she treasured till death, bore the date 1865.

Very zealous for the cause of God, she took keen delight in class meetings and the weekly preaching service. She was ever on the watch for strangers, and unwearied in her efforts to draw others to the church. At bazaars and sales of work she was an active figure, and her financial support was generous and regular. Our sister lived quietly, worked without ostentation, had no craving for publicity, but assuredly her example abides.

The funeral on Monday, May 30th, was conducted by Revs. J.W. Whittaker and A.E. Goodall. On the following Sunday evening Rev. A.E. Goodall conducted a memorial service. Much sympathy is felt for Mr. Mowlam and his son. We pray that the Spirit of God may keep them in this heavy trial.

Julia was born in January 1848 at Brampton, Huntingdonshire, to parents Henry, who worked the land, and Mary.

Julia died on 26 May 1910 at Chesterton, Cambridge, Cambridgeshire.

Note: Julia’s birth record suggests she was born in January 1848, not 1850 at stated in the obituary.