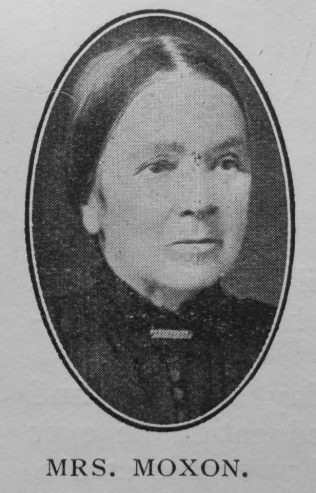 Mrs. Elizabeth Moxon was the widow of the late Nathaniel Moxon, who will be remembered by all the ministers who have  travelled the Stewkley  Circuit. Her ministry, unlike that of her husband, was not in the glare and glamour of public life, but amid the quiet of the home. It was there that her winsome personality did its best work, for she had the joy of seeing all her large family converted.

Her husband, being one of the most popular local preachers, she was often called to make great sacrifice, but she never hesitated or complained; that he was serving the Church was her one delight and concern. Circumspect to a fault and ever serious in demeanour, no levity ever marked her conduct. Through the whole of her life she maintained an unblemished reputation.

Her later life was one of much weakness, and she was confined to her bed for nearly two years. She was nursed with much love and care by her daughters who, though their mother had attained the ripe age of eighty-one, will miss her very much,

Elizabeth was born abt1830 at Stewkley, Buckinghamshire, to parents William Grace, a butcher (1841), and Mary Ann King. She was baptised on 14 March 1830 at Stewkley.

She married Nathaniel Moxon (abt1831-1900), a licensed hawker (1871), in the spring of 1852 in the Winslow Registration District, Buckinghamshire. Elizabeth supplemented the family income working as a plaiter (1871). Census returns identify six children.