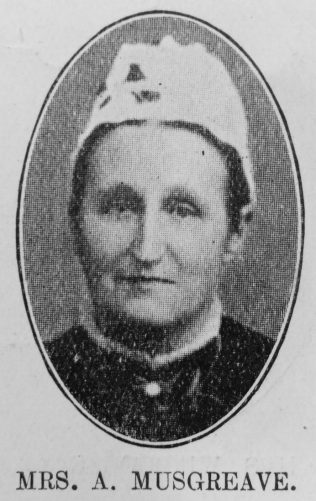 Mrs. Ann Musgreave was a type of the saint in private life. She was of a gentle and unobtrusive disposition; nevertheless she was an influential personality in the church. Her life might seem to some uninteresting, but it was so permeated with Christian influences as to reflect the glory imperishable and divine. No life is common-place which is shared with God.

She was born at East Ferry, in North Lincolnshire, and lived there until her marriage, which took place on her twenty-first birthday. Soon after, she and her husband crossed the Trent to West Ferry and there about twenty years of their married life were spent.

They came to Gainsboro’ about twenty-five years ago. A Primitive Methodist from early days, she remained in unbroken membership with the church of her choice until her death. When young she both taught in the Sunday School and sang in the choir, but as family cares increased these labours had to be discontinued. Interest in Christian service never declined.

She occupied a place in the life of our Trinity Street Church which was all her own. In her quiet earnestness, steady faith, love of simplicity and freedom of worship, she was typical of the religious peasantry of North Lincolushire. A woman of rare beauty of character and unfailing kindness of heart, her passing from us evoked a remarkable expression of love and esteem. Although never rich in this world’s goods, she had been a secret friend to many in their trouble and need.

She crossed the bar on September 1st, 1908, calmly joyful in the thought that she was about to meet her Pilot face to face.

Ann was born in 1843 at East Ferry, Lincolnshire to mother Mary. Mary married Thomas Bainton, a farmer in 1847.