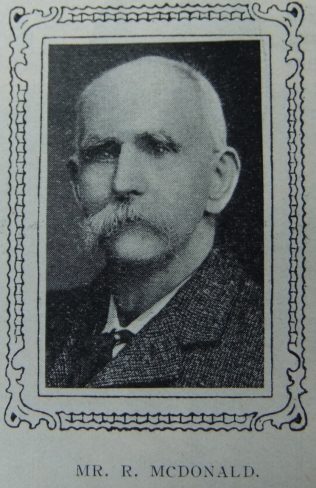 Mr. RICHARD McDONALD, of Manchester Fourth Circuit, was born at Shotts, near Glasgow, in 1840. His parents were Scotch people of the Isle of Skye, his father a Congregationalist, his mother a Baptist who set apart one day every week for fasting and prayer. He was converted in early life in connection with the Independent Methodists, in Glasgow. For about six months he was associated with the Wesleyans, but in 1861 Mr. James McDougall, one of our school superintendents and local preachers, set him to work as a teacher in the Sunday School, and his has laboured in that department ever since. He came to England in 1867, and settled for a period at Higher Openshaw, Manchester, where he joined the Primitive Methodists who worshipped in a rented room at which at that time belonged to the Fourth Circuit. Here he officiated as teacher, superintendent, and society steward. Such was the respect in which he was held by the friends that when he removed to Sheffield in 1873, they presented him with a marble clock, a series of books known as the Bible Museum and a framed address. He only remained in Sheffield three years, worshipping at Peter St., then returned to Openshaw when he became a Trustee of the new Church, and served as teacher and class leader. Openshaw ultimately became Manchester Ninth Circuit, and in 1892 Mr. McDonald joined what is now the Rose View Church in the mother Circuit, where he still officiates as school superintendent, class leader, and trustee. He is also a trustee of two other Churches in the Circuit. In politics he is a Socialist. He is a man of sterling worth, a simple Christian, a judicious official, loved by the children, esteemed by his brethren, respected by all.