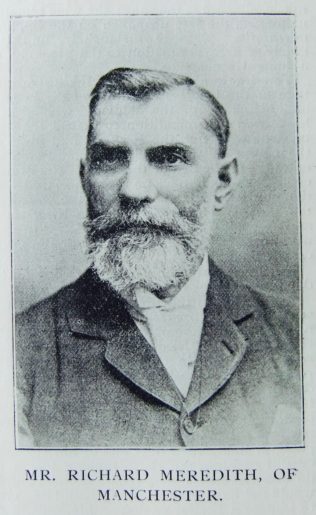 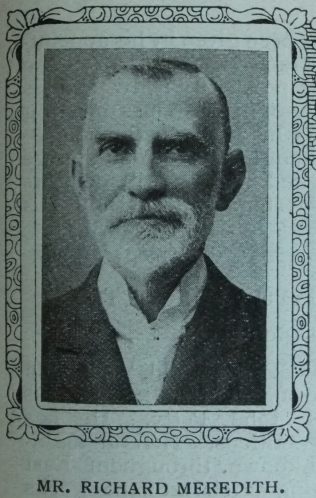 Transcription of Sketch in the Christian Messenger by Wm. Bowran

The subject of this sketch is an illustration of how much the Connexion owes to individual men – whole heartedly loyal and unselfish in their service who have been associated with our church for periods ranging from 30 to 50 years. Year in and year out, by regular attendance at our services and by long continued devotion to its interests, they have helped to make the denomination the power in the land it is to-day.

Mr. Richard Meredith being one of this numerous class of our officials, deserves an honourable place in the roll of ‘Local Preachers Worth Knowing.’ Like many more who have risen to positions of influence in our city churches, Mr. Meredith was village-born. He first saw the light in the year 1847, at Aldon, a small village in the county of Salop.

When quite young his father migrated with his family to Cottonopolis, thinking doubtless that there would be a better chance of his children succeeding in the city than in the village.

When in his fifteenth year our friend had the good fortune to become connected with Upper Moss Lane Sunday school, Manchester, which school is to-day one of the largest in the connexion, having 728 scholars and 80 teachers on the roll. In April last special services were held in celebration of the jubilee of the school, and Mr. Meredith presided at one of the gatherings, which was addressed by past and present teachers. In this connection it is interesting to note that 17 of the present teachers have served the school in that capacity for over 20 years, Mr. Jos. Kelley, senr., and Mr. Henry Beales heading the list with 39 years each. Although not now associated with the school, yet for many years Mr. Meredith served as a teacher, and even to-day is willing to take a class when by doing so he can fill the place of any teacher who is ill or away from home.

At 18 years of age Mr. Meredith was put upon the plan as a local preacher, and he has thus exercised his gifts for well-nigh forty years. In the early part of his career, so great was the demand for his services that in his own circuit and in different parts of the Connexion he frequently preached every Sunday in the quarter. And his labours were not confined to his own denomination, but were freely rendered for the Congregationalists and all the Methodist churches.

This strenuous labour, however, on the Sabbath, after six days work, long and close, as chief clerk in a city warehouse, was more than flesh and blood could stand, and unfortunately in 1886, his health broke down and voice gave way. For a long time afterwards he was unable to do any public work of this description, but we are glad to know that recently he has been prevailed upon to take an occasional service at Moss Lane Church, where he is always welcome, and also at the other places in his own circuit.

During the forty years of his local preachership, Mr. Meredith has brought several young men on to the plan, one of them being the Rev. Samuel Horton, superintendent of our Edinburgh Mission. In addition to his work as a local preacher, our friend has also discharged the responsible duties of class leader. His class is the largest at Moss Lane, and consists of seventy members. Some years ago, the writer, whilst on the staff of the now defunct ‘Manchester Examiner,’ was connected with Moss Lane Church, and attended Mr. Meredith’s class. Attendance at these meetings showed the leader’s great fitness for such an office, and although conducted on the old lines they were far from being stereotyped. The ‘experiences’ were related with intelligence and the replies of Mr. Meredith revealed a good deal of tact as well as insight into life and character. The Rev. J.P. Langham, one of the ablest preachers in our ranks, was superintendent minister of the circuit at the time, and we remember how repeatedly the members of the class acknowledged their great indebtedness to him for his helpful and stimulating discourses.

Mr. Meredith is secretary of his circuit (Manchester Second), and he is also a member of the District Committee. Four or five times he has represented his circuit at the District Meetings, but has persistently refused to be nominated for Conference, or he might have been elected several times. He is a trustee of Moss Lane Church, and also the treasurer, and having the heart and the means to give, his gifts have been constant and considerable. For some years the church has been devoting its energies to the reduction of the debt upon the premises, and besides assisting every effort put forth with this object in view, he promised and gave the last £100 to clear off their liabilities. And now a scheme has been launched to provide a new Sunday School, and Mr. Meredith has promised another £100 on the condition that the Church will raise £900. It is intended not to commence building operations until the trustees have £1,000 in hand.

Such in brief are the main facts in the life-story of our friend. Mr. Meredith, who for over 12 years has been in business on his own account as a merchant in the city, is a living embodiment of practical success in commercial life. He has risen to an influential position by his integrity, his straightforward dealing, and his unswerving trust in his own powers and energy. He has the quick mental perception, the sound judgment, and the force of character which are essential to success. In Christian service Mr. Meredith has displayed the same qualities, and they have enabled him to do valiant work for Moss Lane Church. Although intensely loyal to our own denomination, he is broad and Catholic in his sympathies, and rejoices in the success attending religious work everywhere. As a friend, his attributes and qualities include deep practical sympathy, generosity, and unfailing courtesy and hospitality.

Much of his success and happiness in life he owes to the loyal and devoted care of his excellent wife. Mrs. Meredith, who is a sister of Mr. Joshua Longden, of Great Western Street Church, Manchester, seconds her husband’s efforts with great heartiness, and in church work especially she is seen at her best. Moss Lane Church has a very warm place in her heart, and she is always seeking to advance its interests.

The Connexion has no more loyal, consistent, generous, and worthy members than Mr. Richard Meredith and his amiable wife, and we pray that they may be long spared to continue the faithful and valuable labour which has been so ungrudgingly given for so many years.

Richard was baptised on 30 June 1847 at Stokesay, Shropshire. His parents were Richard, an agricultural labourer, and Susan.

Richard died on 5 March 1937 at St Annes on Sea, Lancashire.