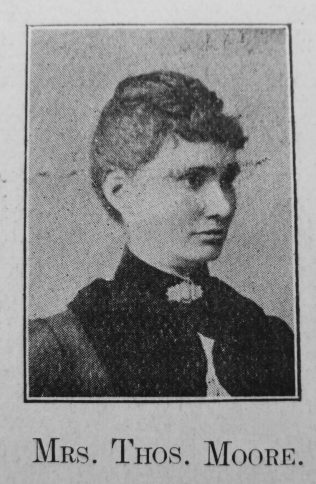 Transcription of Obituary in the Primitive Methodist Magazine by A.W.

Our Society at Massingham, King’s Lynn Circuit, suffered a severe loss through the death of Mrs. Thos. Moore, which took place on Friday, January 8th, very suddenly, caused by paralytic seizure. She was forty-six years of age and had been a member of our Church twenty-four years. She was not a strong woman, but no one imagined her death would take place as it did. She lived a consistent Christian life, and her cheerfulness, often in times of much physical affliction, was a very noticeable feature of it. Her home has really been the home for preachers, both itinerant and lay, ever since she had a home of her own. We have no doubt as to her “abundant entrance” into our Father’s home on high. She was interred by Rev. Arthur Wood, at Massingham, on January 13th, in the presence of numerous friends, the same minister preaching her funeral sermon to a crowded congregation on Sunday evening, January 17th. Our sympathy flows toward our brother, who has been so unexpectedly bereaved of his partner in life. Mr. Moore wishes to thank the many friends who, by writing him and by other ways, have given him the comfort and support of their sympathy.

Sarah was baptised on 18 December 1855 at Docking, Norfolk. Her parents were Robert, an agricultural labourer, and Phoebe.