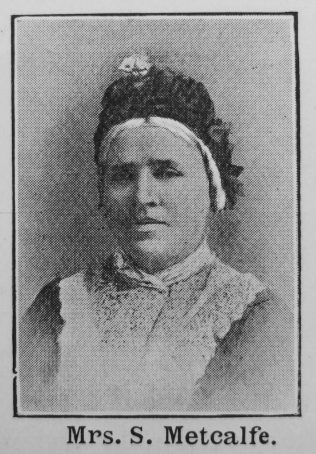 Transcription of Obituary In the Primitive Methodist Magazine by John H. Lancaster

In the death of Mrs. Sarah Metcalfe, of Cononley, in the Skipton circuit, a great loss has been sustained, and another golden link associated with a glorious past has been severed. She was born at Cononley, and, losing her mother in early life, had very few advantages. Her conversion took place in the early part of the sixties, and for nearly forty years she was a most devoted member and worker of the Primitive Methodist Church. It was in the infant days of our cause at Cononley, in an upper room, known as the “Bark Chamber,” when a service was being conducted by the late Mr. James Fry (a local preacher, of saintly memory, on the Skipton station), that our sister was led to decide for Christ. Some of the elder members of her family, who are now devoted workers in our Church (two being local preachers, and another Society Steward), distinctly remember how real this event was, and the impression it made upon them. No Sunday bird-nesting, etc., had to take place after this; but at the “Bark Chamber,” the mother and all her children were amongst the most regular attenders at all the services.

Her husband at this time had gone to the Australian gold-fields. In the letters from home the boys had to tell their father how mother had found the Saviour, and what a great blessing religion was to her. At this time also she began to make a home for some of the early preachers; this the grandfather, who was living with his daughter, at first objected to, but in face of this and other difficulties Sister Metcalfe was unmoved and unwavering in her allegiance to Christ and the cause she had chosen. Be it also said, her home from this time forward was ever a preacher’s home, not only on Sundays, but on weekdays as well, whenever the minister was planned at the village. John, her youngest son, with whom mother made her home in her last years, in this particular is carrying out the old family custom. In this way hundreds of God’s devoted servants will ever be grateful for the hospitality and sympathy that have come to them through Sarah Metcalfe. We are sure that this ministry will not lose its reward in that day, when even “the cup of cold water” will not be forgotten.

In course of time the father returned from the gold-fields, and was led to a brighter and holier life through her instrumentality, and died in the Christian faith, and in the hope of the Gospel.

The eldest son, George, says “he well remembers how the family altar was erected in the home, and has no doubt but that husband and children will form gems in the crown of her rejoicing. Her last hours were spent in commending her spirit to the Great Father, and when her feet were on the brink of the river, — with the death glaze in her eye — she could say “Yea, though I walk through the valley of the shadow of death, I will not fear,” “Thy strength is all-sufficient.”

A few days before her death she was visited by the writer, who found her full of hope and confidence, although her affliction was most painful – having fallen down some stone steps in the backyard, at the house of her daughters Mrs. Driver, of Cross Hills, where she was spending a brief visit, the cause of the fall being frost and snow, which at the time had made the steps quite dangerous.

The shock and internal injury were the cause of death, although it had been evident to the family for some time that mother’s strength was rapidly declining. Little, however, did they think that the end was so near. This came on March 25th, 1900, aged 72, when like a weary child our dear sister fell into a peaceful sleep to wake up on the other shore, where suffering and death are known no more.

In 1865 the Metcalfe family left Cononley for Windhill, in the Shipley Circuit, where they resided for 14 years, and then returned to their native village, where their presence and service had years before been a source of great strength to our cause.

Windhill two events were ever memorable to Sarah Metcalfe. The first was the conversion of her husband, who returned from Australia in 1865, and the second was the building of the new Primitive Methodist Chapel at this place, which cost over £3,000. This to Sister Metcalfe was a period of great activity and self-denying labour. The society was composed almost entirely of working people, none of whom did and sacrificed more for the cause than she.

Of her it might truly be said, “She did what she could.”

The interest, love, and devotion to her Church was wonderful almost to the last. She worked like a young woman on behalf of a Circuit Bazaar to clear off the debt on the minister’s house, and when this was accomplished, Sarah Metcalfe’s joy was like the old-time “joy of harvest.”

“Rest after toil” in her case will be beautifully true. May our last end be like hers, rich in faith and full of consecrated service to Jesus our Lord.

Sarah was married to John Metcalfe (abt1818-1886) on 8 October 1848 at Kildale, Skipton, Yorkshire. The 1871 census describes John as a brickmaker’s labourer, and in 1881 he was a pot hawker. Census returns identify six children.

Note: The surname is spelt Metcalf in earlier records.