A Saint of the Countryside 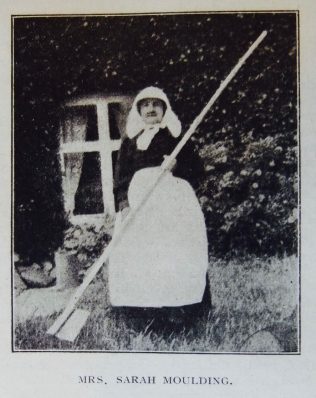 Transcription of an article in the Christian Messenger by W. Bramwell Hill

A REAL link with the past life of the Wiltshire countryside has been severed by the passing of Mrs. Sarah Moulding, of Upper Upham, near Swindon. Many of the men who served in the Great War will have had cause to remember Chiseldon Camp for many reasons, and the lonely outpost of Upham is situate not far away. This venerable lady was born as far back as 1833, and represented a type of old-world rurality now fast disappearing, but whose spirit is surely to be coveted. Her husband pre-deceased her some twenty years ago. When living at Elcombe Bridge, Wroughton, Swindon, this quaint but godly couple were loyal and devoted members of the little wayside sanctuary at Hay Lane (Swindon I. Primitive Methodist Circuit). The old man’s prayers are remembered yet, not only for their quaint phraseology, but for their devout spirit of simplicity. In poke bonnet and smock frock they were a delightfully quaint representation of the rusticity of the English countryside, and faithfully they wended their way to worship whenever possible. Mrs. Moulding was in many ways a very remarkable woman. Devout in nature, and cheerful and contented in mind and disposition, the years sat upon her lightly, while she retained the whole of her faculties (except the sense of smell) up to the last, and what was even more remarkable, was able to sew without any aid of spectacles. Active to a degree, as recently as two years ago she walked the journey from Upham to Chiseldon village and back, a distance of four and a half miles.

She possessed a wonderful memory, and was able to recall with apparent ease many of the old-world happenings of the various villages in which she had lived. She revelled in the lore of the countryside, and her conversation was full of rich old English sayings, remarkable in their quaintness. Of the ancient games of the Downland village of Wanborough, indicated in Alfred William’s book, “Villages of the White Horse,” which included backswording and wrestling, etc., she had vivid recollections, and many a story could she tell of these old times.

That Mrs. Moulding knew something of the rigour of these good old days is indicated by the fact that she commenced work as a mere child, being engaged at “bean planting.” at the remuneration of 6d. per day! She loved to recall the time when, according to the custom of the period, the farm labourers and their wives “went to fair for to be hired,” and of the time when it was the custom to gather each morning “obeisance,” in which was involved the curtsey and bow to the farmer as he came forth from the farmhouse. That little ceremony over, the workers turned to the tasks of the day.

And so has passed another link with the old-fashioned life of those early days. Singularly appreciative in spirit, Mrs. Moulding had not become soured by the experiences of the passing years, and she was beloved by a large circle of friends. She lived a life of simple goodness in the quiet places, and then passed on, leaving the world the richer for her sojourn therein.

Sarah Moulding, nee Mace, was born abt 1833 at Wanborough, Wiltshire, to parents William and Mary. William worked the land. She was baptised on 8 October 1837 at Wanborough.