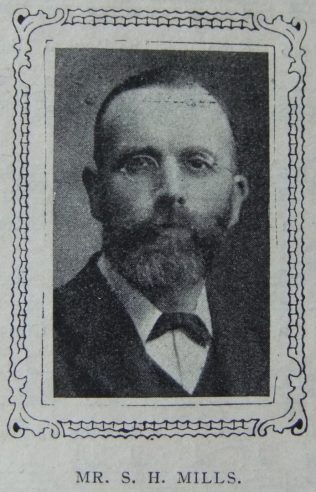 A man of many parts is Brother Simeon Mills. Although only in his forty-sixth year, he is regarded as one of the “Fathers” in Sherston (Malmesbury Circuit) where he has resided for twenty-five years. Trained in a godly home (his father was a local preacher nearly fifty years), at the age of eighteen he became definitely a follower of Jesus, and soon after began to preach. He has had strong leanings towards the work of an Evangelist, or the regular ministry, but as the way did not open up for either position, he threw himself whole-heartedly into the general activities of the church.

When he first joined the ranks of Class leaders there was no regular Class meeting held in this village, but he soon altered that, and great good has come to our people here through the weekly meeting.

Every Sunday afternoon, with few exceptions, you will find him at his post in the Sunday school – giving at the close of the session an address, which, with some fine pictures shown, helps to illustrate the International Lesson. He has been superintendent for twenty-three years, and worthily fills such offices as Society steward, Chapel treasurer, organist, trustee, etc. he is also Vice-president of the Local Free Church Council. Several times the Station has sent him as its representative to the District meeting.

Bro. Mills is greatly concerned for the spirituality of all our members and “Holiness to the Lord” is his motto.

His deep piety has not been any barrier to his presiding at political meetings, where he advocates Free Trade and the abolition of the Lords’ Veto. He is greatly assisted by his good wife in all he undertakes. Here at all times the preachers find an open house. May his practical and valuable ideals be realised.

Simeon was born abt 1865 at Brokenborough, Wiltshire, to parents Simon and Mary Ann. Simon was a farmer and labourer.

Simeon was a shoemaker.

Simeon married Elizabeth Hampton (abt 1860-1932) in the spring of 1887 in the Malmesbury Registration District. Census returns identify two children.