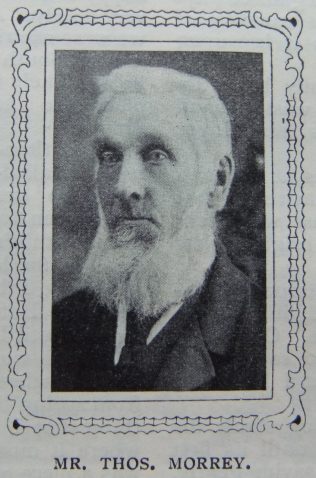 Thomas Morrey was born at Moreton Wood in the Market Drayton Circuit, June 1826, and still resides on the same spot on which he, his father, and his grandfather were born. He was converted to God in 1843, at the same time as his father and two sisters in a Primitive Methodist Cottage prayer meeting. His mother who had become converted a year or two earlier at a Primitive Methodist Camp Meeting made a fresh consecration of herself to God at the same service. A Society Class had recently formed under the leadership of Adam Roden, and to this the family attached themselves, and Thomas has retained a membership unbroken up to this day. He became a local preacher in 1844, and well remembers his trial sermon preached before Rev F. Priest at Mill Green. Our brother soon became aware of the need for total abstinence from intoxicating drinks and signed the temperance pledge in 1844, at a time when teetotalism was unpopular, and doctors and ministers of the Gospel considered strong drink as one of the necessities of life. Mr. Morrey was at the time working as a farm hand, and the persecutions he had to bear from his fellow workmen were sometimes severe, but he has held to his temperance pledge and given noble and successful service to the cause of temperance in his own neighbourhood.

His journeys to appointments were in those days long and frequent. Places twelve, fifteen and sixteen miles from his home were visited almost every Sabbath, and although his labours have been abundant and his work hard he is still hale and hearty, and is taking his share of services on our Circuit.

He has filled the office of Class Leader at Moreton Wood for many years, and many have been his calls to the bedside of the sick and the dying. His upright life has gained the respect and confidence of all that know him.

Thomas was born in 1826 at Moreton Wood, Say, Shropshire, to parents Samuel and Etty. Samuel worked the land.