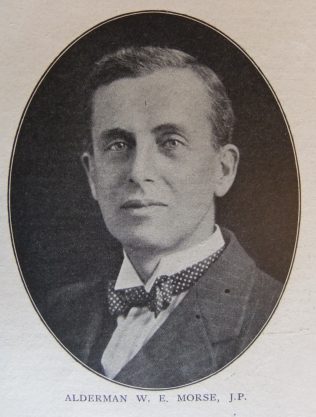 William was born in 1878 at Stratton, Wiltshire, to parents Levi Lapper Morse and Winifred Elizabeth Humphries.

In 1926, William had taken control of the company built up by his father. It had a staff of over two hundred. The business was run on the most approved ‘modern lines’, where the note is service, and where it was believed that efficiency was best achieved by the most cordial relations between employer and staff. No elderly employee retired without a pension, and every member of the staff partook in the annual profit sharing.

William was associated with Regent Street Church, Swindon for most of his life. An example of his help to other churches in the circuit was evidenced when the Rodbourne Road Church was having difficulties. William undertook to bear the cost of the Church Anniversary, and continued to do so by securing the services of the Vice-President of Conference each year, with the Mayor of Swindon and the President of the Chamber of Commerce to preside at the annual meeting and concert respectively.

William became circuit steward of the Swindon II Circuit. For several years he served as leader of the Young men’s Bible Class.

William served on the Methodist Union Committee from its formation. He was also a member of the Bookroom Committee and treasurer of the General Chapel and Chapel Loan Funds.

William was Vice-President of Conference in 1925 at Scarborough.

William was a Liberal MP in the period 1923-4 for the Bridgewater constituency.