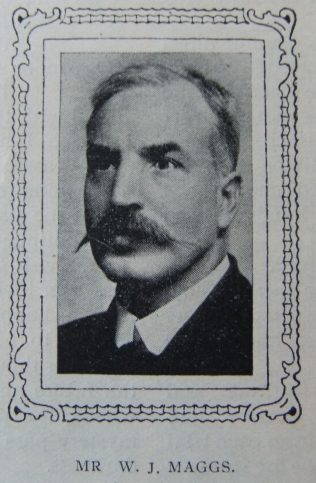 MR. W. J. MAGGS has been associated with the Rose Green Society, on the Bristol First Circuit since his infancy, and has loyally stood by it directing its welfare for many years. His father had been a local preacher, Sunday school superintendent, Class leader, Secretary and Treasurer of the Trust. A beautiful marble tablet was placed in the church in memory of him by the members and friends in recognition of his faithful services for over two score years.

Mr. W. J. Maggs was born December 14th, 1863, near our church, and now lives not very far from it. For twenty-five years he has been the Society steward and has also filled the following positions:  teacher, C.E. Leader, Sunday school Secretary, Assistant Superintendent, Secretary and Treasurer of the Trust, and as he mirthfully states, Stop-gap preacher. He is delighted with the change that has come into Christian life, the change from wrangling over creeds and doctrines to the life of Christian character and deeds. His ambition is to see a strong, healthy, vigorous society making itself felt in the neighbourhood. He believes in having as much of Heaven on earth as possible and shows how refreshing and stimulating Christianity is for this life. His wife, five sons and two daughters regard Rose Green Church as their spiritual home.

Mr. Maggs is especially at home with young people. He endeavours to read for two or three hours each day, and that means reading late into the night. He has a good library of about 500 books and is one of the best read men on the Circuit, though he had to leave school at the early age of nine in order to earn his living. He is energetic and persevering, of a hopeful temperament, and a most reliable friend.

The subject of this sketch was probably William Isaac Maggs born to parents William and Ann. William, senior, was a coal miner.

William worked as a boot and shoe maker/repairer.