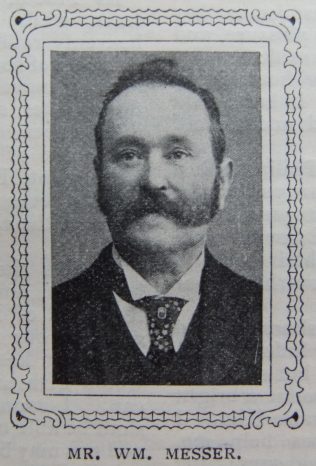 Mr. W. Messer has for many years been a faithful adherent and supporter of Claremont Church, which constitutes the Bath II. Circuit. He is now upwards of 50 years of age, and for thirty years of that period he has been a follower of Jesus Christ. The late Mr. J.G. West, of the Bath I. Station, greatly influenced him for good, but he attributes his conversion to the instrumentality of the Rev. George Mitchell, and the great change took place in Westgate Buildings Chapel, Bath. His association and service, however, have been in connection with Claremont, which became an independent Station twenty-five years ago. For two years our brother was Circuit Steward, and for fifteen years in all he has held the post of Society Steward. He has done well in business, and has always liberally supported the cause. He still fills the office of Society Steward with that geniality and fidelity that has ever marked his service for the Master. He has four children who have been brought up in our Sunday school. Two of them are members at Claremont, and the other two, a son and a daughter, are members of Christ in other churches. To be diligent in business, fervent in spirit serving the Lord has been our friend’s ideal. And this is fitting for a Society Steward. He is the most prominent official in the Society and its affairs are largely under his care. He should be a model business man, for he has charge of the finances of the church. More important still is his religious spirit which will often set the tone of the church. And everything with him must be a Divine service. So has it been with our friend. We trust he has many years of useful service before him before the translation to the Father’s House shall come.

William was born abt 1855 at Bath, Somerset, to parents James Thomas Messer and Rebecca Guildford. James was a plasterer.

William worked as a house painter.