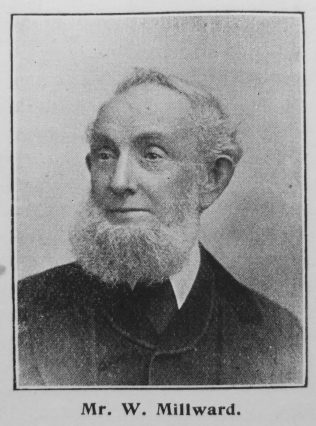 Transcription of Obituary In the Primitive Methodist Magazine by J. Aston

Mr. William Millward, of Newcastle-under-Lyme, “fell asleep in Jesus” on August12th, 1901, at the age of 86. He was one of the best known men of the town, and was held in great respect by all classes of people. The most prominent people in the town gave him ready audience, and in their presence he always deported himself with easy dignity. The oppressed and poor always looked to him as a friend, and with these he was immensely popular, for he was ever ready to show sympathy and render help in any way he could. In his removal one of the links which connected the Higherland Society with the Fathers of our Connexion has been broken. For over 50 years he has been associated with our Church in Newcastle, and, as a trustee and member of Society, has taken the deepest interest in her welfare. He owed much to his father, who was ever referred to as one of the holiest men that had ever lived in the town; his father’s consistent life had a blessed restraining influence on our brother even in his younger days, when he was wild and thoughtless. It was the conviction that his wild conduct would break the heart of his father that led to his taking his first step from the ways of sin to Christ. He had a deep reverence for the Scriptures, holding with a firm grip to the truth therein revealed; and the ministers of the Gospel, both itinerant and lay, were always held in high respect. He truly loved the services of the sanctuary, and was one of the most regular in his attendance. The last service he attended was on August 4th. During the following week he was confined to his room, but hope was cherished by his family and the doctor that he would rally up to a day or two before he died. On the day of the funeral a large number attended, and throughout the town there were signs of the great respect in which he had been held. A memorial service was conducted by the writer on September 8th. The chapel was well filled, and the choir sang a special “Memorial Hymn” and the anthem “Vital Spark.” The service throughout was most impressive. The following extracts from letters received were read:-

Rev. J. Barnes wrote, “I first became acquainted with our brother 39 years ago, when I was first stationed to the Newcastle Circuit, and renewed the acquaintance some twenty years later, when I was stationed there for a second time. His regular attendance at the services, his deep interest in the cause, and his strong attachment to our ministry were very manifest. The last time I saw him he was ill in bed, and when I left him it was with a pledge we would meet each other in heaven.”

Rev. G. Jones wrote: “I have known W. Millward for nearly 30 years. His interest in and devotion to the Higherland Church and School were unquestioned.”

Rev. T.W. Stafford, Wesleyan minister, son of the late Rev. N.W. Stafford, refers to him as follows: “He was my father’s friend, and many were the hours and days they companied with each other. I well remember how eagerly his visits to our home were anticipated when I was a boy. As I look back I recall his abounding cheerfulness. He was an optimist, and saw the best in life. He could be stern when the occasion demanded; he could be indignant if he felt that men were seeking to win a mean advantage, but his normal attitude of mind was that of cheerfulness; this trait of character I hold was due to his faith in God. He was also a man of deep sympathy. His Christian life was one of transparent consistency but singularly lacking in ostentation. He spoke little about his inner experience, but he lived a noble life, he was reserved and reticent about religion, but he was a man of integrity, a hero of faith and a child of God.”

Our brother has left behind him the legacy of a noble life; may his children and grand-children, many of whom are associated with us, imitate him in his integrity and uprightness, and in his consistency of life, and at last meet in the Home Eternal.

William was born abt1815 at Newcastle under Lyme. His father was called Henry.

William worked as a tailor.

William married Ellen Gouldin (b abt 1831) in late 1894 at Newcastle under Lyme.