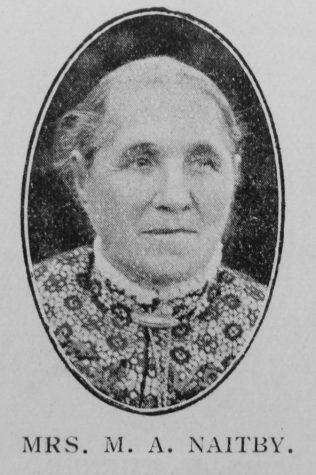 Transcription of obituary published in the Primitive Methodist Magazine by J.W. Middlemiss

We regret to record the death of Mrs. M. A. Naitby, beloved wife of Mr. John Naitby, of Great Broughton, in the Stokesley Circuit, after a short but painful illness. She died triumphantly on Monday, August 21st, 1911. She was a prominent worker in our Zion.

Mrs. Naitby had a large heart, and was most hospitable to the officials of our Church, both ministerial and lay, was also a loyal P.M., a generous supporter, and a constant attender at the various means of grace. A hearty welcome had been extended to preachers to her home for upwards of forty-four years, and most of the prominent ministers during that length of time enjoyed her proffered comforts. It was a constant joy to her to descant on the virtues of those good men, whose names she revered and endeavoured to remember.

For several years Mr. Naitby was Circuit Steward of Middlesbrough, and during that time his wife—a true helpmeet—was first in position and foremost in activity. Amongst Cleveland P.M.’s the name of Naitby is well known, for Mrs. Naitby, accompanied by her husband, was often seen at stone-laying ceremonies and church opening services, and their monetary gifts would never be the least on the list. Ayton, Haverton Hill, Thornaby, Middlesbrough, Stokesley, Hartlepool, etc., can testify to this fact. She has been a reader of the “Leader” from its commencement and a regular subscriber to the Connexional magazines for many long years.

An impressive funeral service took place on the following Wednesday; the following ministers took part: Revs. C. Pettler, G.B. Richardson (Middlesbrough), J.W. Middlemiss (Stokesley). The remains were then conveyed to the pretty village churchyard of Stainton, where they were laid to rest.

Mary was born abt1843 at Gilling West, Yorkshire, to parents George, who worked the land (1851), and Jane. She was baptised on 18 August 1844 at Gilling, near Richmond, Yorkshire.