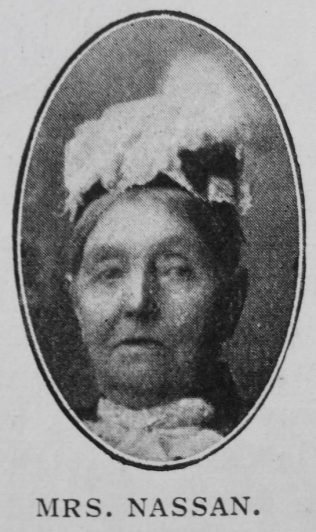 Transcription of obituary published in the Primitive Methodist Magazine by F.M.

Mrs. G. Nassan passed away on Wednesday, June 28th, 1911, aged ninety-one years. She was one of the oldest members of the Knaresborough Church, and her interest in its welfare remained unabated to the end of her life.

She was a woman of strong personality, and had she been educated, we can scarcely calculate the amount of good she might have done. Still, in spite of limitations arising from the lack of education, she rendered very valuable service to the Church. When she was well you could always depend upon her to attend the services and meetings, and any assistance it was within her power to render she most gladly gave. She was a good woman, and her advice was often sought on the practical questions of life, by her relatives and friends who knew that her judgment was generally reliable.

When infirmity prevented her from leaving her home, nothing pleased her more than for someone to visit her and talk to her about the affairs of the Church. If you carried to her some intelligence of prosperity in any part of the station it would act like a tonic upon her. Next to her family, she loved the Church, through whose ministry she was ever ready to confess she had derived great good. To the end her faith in her Lord never faltered.

On the day of the funeral a large number of friends gathered to pay their tribute of respect to one they had known and loved; and a memorial service was conducted on Sunday, July 2nd, by the Circuit Minister.

Elizabeth was born abt1820. Her birth place is uncertain. Some records identify Newcastle upon Tyne, Northumberland, another states Scotland, another says Yorkshire.

Note: Most records spell the surname Nassau rather than Nassan as stated in the obituary.