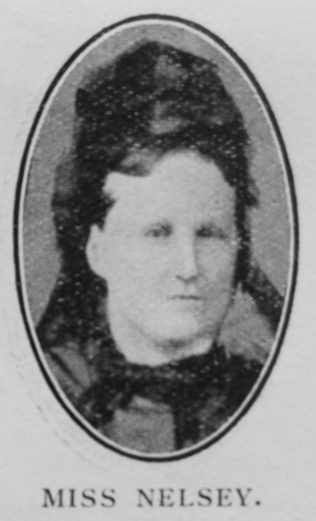 Born at  Bishop’s Norton, Brigg Station, in 1832, Jane Nelsey spent the whole of her life there. At fifteen she experienced conversion, joined our Church, and henceforth became an ornament of religion. Gifted with more than average intelligence, she was able to do good in various ways. As teacher of the day school for nineteen years she had special influence over the young life of the neighbourhood, and this influence she wisely used in favour of our own Church. In Sunday School and choir she rendered invaluable service in training the young, her wholesome influence leading many to serious thought, and genuine respect for the institutions of the Connexion. For many years she made a home for the second preacher, and the writer can bear testimony to her unstinted and generous hospitality.

Lameness caused her much inconvenience latterly, but she regularly attended the services. Without exception, the ministers highly respected her. Rev. . Spensley, who twice travelled in the Circuit, speaks of her as “pure, noble, and Christly.” In the village and over a wide area she was respected by all classes, and when her mortal remains were reverently and lovingly borne to the grave, deep sorrow was experienced by all.

She leaves a sister and brother-in-law, both much beloved by our people, and the beautiful village sanctuary she did much to erect, and build in the spiritual sense, will ever be associated with her memory.