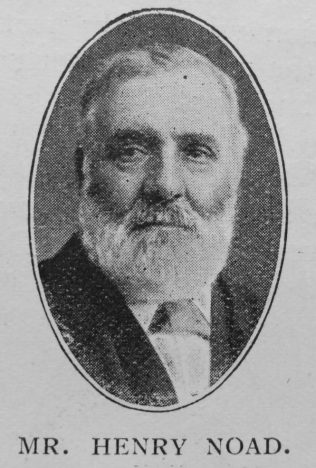 Transcription of obituary published in the Primitive Methodist Magazine by J. Bradley

Westfield Street Church, St. Helens lost one of her best and most useful members when Brother Henry Noad was called home on the 4th of April, 1910. He had lived in her fellowship for nearly 50 years; and in all the movements and labours which have built up the strong and flourishing Society and Sunday School of to-day he had taken a very active part. For a number of years he filled the office of Superintendent of the Sunday School with marked success. He was also a trustee and Class leader.

But the influence of his personal character was a more valuable asset than even his work. Manly and child-like; practical and peaceable; full of kindness and cheerfulness; from strife and envy free, he was beloved by all, and not least by the children, whose spontaneous sorrow and sympathy at his funeral was very touching. Brother Noad has left to the Church and his family a legacy of spiritual wealth which will yield an interest of inspiration and encouragement for many years to come.

He was interred in the St. Helens’ Cemetery by the writer, assisted by Rev. John Willcock, of Skelmersdale (Congregationalist), formerly one of his Sunday School scholars, and Rev. John Gillender. An impressive “In Memoriam ’’ service was conducted on Sunday, April 10th, by the Pastor, in the presence of a large congregation.

Henry was born abt1836 at Pensnett, Staffordshire, to parents Henry Noad, a furnace man (1841), and Ruth Darby. He was baptised on 2 October 1836 at St Thomas, Dudley, Worcestershire.