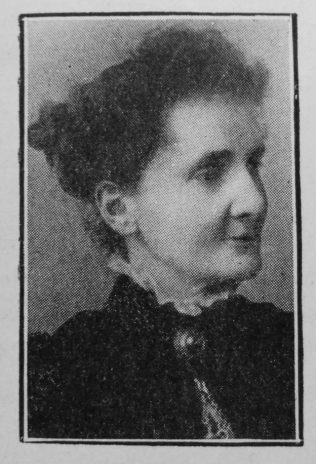 Transcription of Obituary in the Primitive Methodist Magazine by J.S.

Mrs. Norris was born January 30th, 1857, at West Wycombe. She was the daughter of Mr. B. North, for some time time a highly esteemed local preacher in the High Wycombe Wesleyan Circuit. She had the advantages of an intensely Christian home.

When quite young she was led to surrender herself to the Saviour. She was called to serve the Church as organist and teacher in the Sunday School, which offices she filled with skill and acceptability.

In June, 1887, she was married to the Rev. F.W. Norris. The early years of their married life were extremely arduous and full of sacrifice. She was a most faithful helpmeet, and rendered valuable service in the public work of the Church.

The closing years of her life were full of suffering. The early strain upon her highly strung temperament sowed the seed of a harvest which was reaped as nervous prostration. Yet, with all the weakness and sorrow, she had done what she could, and that brought a harvest of consolation and peace. Her interest in the work of the Church and the prosperity of the Redeemer’s kingdom never abated. “They also serve who only stand and wait.” She was seized with an attack of pneumonia, March 30th, and the mortal strife ceased April 6th, and her soul passed peacefully to the “Rest of God.” We think of her as among those “which have come out of great tribulation and washed their robes white in the blood of the Lamb.” We are grateful to God for the quiet ministries of such a life, bearing the traits of remarkable heroism, Christian fortitude, holy patience. Her remains were interred at Reading, April 11th, surrounded by many sympathetic friends.

We commend our brother and the three motherless children to the Wisdom that erreth not, and to the Love that never faileth.

Serena was born to parents Benjamin North and Dinah Gray.

She married Frederick William Norris (1867-1917) in the spring of 1887 in the Watford Registration District, Hertfordshire. Census returns identify three children.