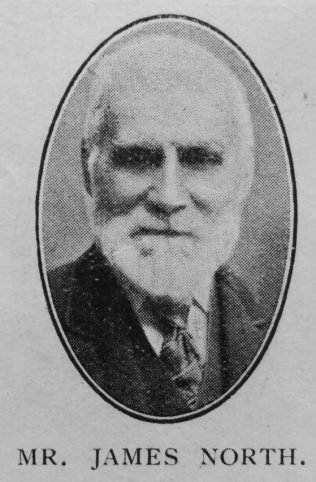 Transcription of obituary published in the Primitive Methodist Magazine by R.H.Q.

The Bottesford Circuit has experienced a great Joss by the death of Brother James North, September 9th, 1909, in his 83rd year. For over 50 years our brother took an active part in the work of the Circuit, and it was largely through his instrumentality that our Allington Chapel was built in 1859. For over half a century our brother travelled hundreds of miles as a local preacher, proclaiming the Gospel of Redeeming Grace. Many of our present officials in this and other circuits owe a debt of love to James North, and claim him as their spiritual father.

In spite of Priestcraft and Squirearchy our old friend opened his house for regular preaching services, and though we are still debarred a site for a chapel, our services are still being held week by week in the same house, occupied now by Mr. J. North, then jun., a worthy son of a grand sire.

At the death of the late Rev. Robert Middleton, the authorities requested Brother J. North to fill the vacancy created on the Bottesford Circuit, until the next conference, which he did with great ability and success. Mr. North was an earnest and thoughtful preacher and a noble gentleman, and was regarded as the Apostle and Father of the Bottesford Circuit.

For some time previous to his death, he resided with his son at Derby, but had a strange hankering for his old home at Sedgebrook, and on Saturday, September 4th, he came from Derby to Sedgebrook to see his son James. He attended the service held in the cottage (his old home) on the Sunday afternoon, and before the service ended he was seized with a kind of stroke, from which he never recovered. He always expressed the wish that he might die at Sedgebrook. God granted his wish. On Saturday afternoon he was laid to rest in the quiet little churchyard of Sedgebrook,

James worked the land for a living.