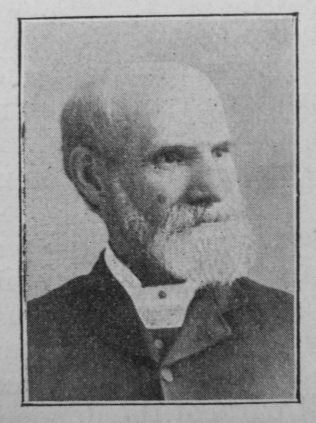 Transcription of Obituary in the Primitive Methodist Magazine by H.Y. (Henry Yooll)

Amongst the noblest of the sons of Primitive Methodism in the North we must place the name of Thomas Nightingale of Howdon-on-Tyne, who for many years occupied a foremost position as a local preacher and Christian Worker in the Sunderland and Newcastle District. His association with our Church dates from the year 1858 when he was attracted to the services by the hearty singing in the old chapel at Howdon; and he maintained an unbroken connection with the North Shields Circuit until his death which occurred at Lemington-on-Tyne on June 18th, 1904. To such distinguished men as the Revs. Thos. Smith, C.C. McKechnie, Thos. Southron, and others, he owed the shaping of his character and the inspiration of his life, together with an intense unfaltering loyalty to the Primitive Methodist Church. A peasant’s son, he came from one of the Northumbrian villages and was no stranger in his early days to privation and struggle. But he had grit and conscience, and on making the great choice, possibilities of great value were discovered in his character and life. He sought to supply the lack of educational opportunities by personal diligence and in this he succeeded in even a marked degree. His abilities and high Christian character soon found recognition, and as a local preacher he has had a most distinguished career. His early ministerial friends would have rejoiced to see him in the regular ministry, but perhaps he was where the great Father intended him to be. Certainly he filled a worthy and conspicuous place as one of the lay “notables” in the North, and this during a period of years which could boast of some of the ablest and most successful lay preachers the Connexion has ever known. His influence was not confined to his Circuit, or even to his District. He had a Connexional reputation, was frequently at Conference and appointed to address its greatest gatherings. He has also spoken at the May Missionary meeting in London, and with his life-long friend, Mr. J.H. Joplin, was a constant and valued helper at the annual conventions for the deepening of spiritual life. He had special gifts and was cast in a mould quite unique. He was a diligent and constant student of the Word of God and knew how to value good books. He brought these stores, together with his keen observation of men and things, into his loved task of preaching the Gospel, and not seldom in a tide of spiritual passion was enabled to witness remarkable results.

His eloquent utterance, intelligent grasp of the truth, fine imagination, rich, genial humour, and above all, intense spiritual unction and earnestness gave to his ministrations a high quality and an abiding power. Scores of letters from all parts of the denomination bear testimony to the results of his preaching in quickening the life of believers, and in the saving of precious souls. In the counties of Durham and Northumberland, and in yet wider fields, his memory will long be revered, and many souls will be his “crown of joy and rejoicing in the day of the Lord Jesus.”

As a preacher he laid much under tribute. Besides his prayerful study of the Bible and his general reading and observation, he would use illustrations suggested to him by his favourite pastime of gardening, and thus he kept up freshness in the treatment of the great themes of the pulpit.

Brother Nightingale was a rare companion. He could be the life of the social circle. His rare conversational gifts, the racy anecdote, the apt and kindly repartee, the play of friendly humour, often brightened the social hour, and in it all there was nothing trivial or vapid, but much that directly helped spiritual thought and feeling. Of course, he had the defects of his qualities, but these were forgotten in the qualities themselves which were so substantial and good. He was a kindly man, humble, sincere, a hater of shams, a faithful friend. The tribute of his excellent son James, who is in our ministry, (a fact which gave the father unbounded joy) may here be given. “I know he has given the last half-crown he had in the world for his class ticket; he has given the last two shillings he had to a widow in her poverty in the course of the Christian duty of visiting. He never was a man of means, but again and again he sacrificed to further the interests of his Church and do a generous deed quietly. He faced ordeals for conscience’ sake others would have shrunk from. When I recall scenes of home-life in my early days, his wrestling in prayer in his room for his children, the Church, and the unsaved, I feel a great inspiration come to me. I never knew him do a mean action.”

This testimony finds abundant corroboration in a wide circle of acquaintances to whom his memory will be ever fragrant and inspiring. Our brother knew the meaning of sorrow; the shadow of severe trial chastened his lot, but he lived heroically and climbed the shining ladder. His was not the religion of sentiment but of sterling principle, of courageous devotion to duty, of firm, patient trust in God, of the vision and quest of the eternal. His departure makes the district and the Connexion poorer, for we shall not soon see his like again.

He was interred at Elswick Cemetery on June 21st. A service was held in our Maple Street Church (the last church he preached in, and from a favourite text, “Although the fig-tree shall not blossom,” etc.). The leading ministers and laymen of the district attended, including the Revs. A. Latimer, W.A. French, C.G. Tetley, A.T. Guttery, H. Pratt, J. Richardson, and others. An impressive tribute was paid by the Rev. J. Young to the character and service of the departed. A memorial tombstone erected by public subscription will signalise the appreciation in which his name is held. Our tender sympathy and prayers are given on behalf of the much respected widow and family. May a happy re-union be theirs and ours.

Thomas was baptised on 6 October 1833 at Longbenton, Northumberland. His parents were Thomas, an agricultural labourer, and Mary.