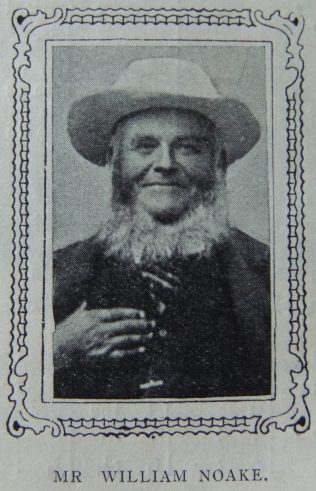 WILLIAM NOAKE, of Wilton, has been a Class leader and Local Preacher for forty years. He received his first religious impressions at Zeals, in the old Motcombe Circuit. It was during his daily occupation among the sheepfolds that like a lost sheep, he came back to the fold of the Good Shepherd. The joy of conversion, to one of his warm temperament, found characteristic expression, and in the lively religious services at Zeals he found a congenial people and a suitable sphere for Christian fellowship.

Twenty years ago he removed to Wilton, where, appointed Class leader, to his grief, he found the class almost derelict. It has ever been his sorrow that the claims of the class have not been more appreciated by his fellow Christians.

Combined with this work he used to do a substantial share of work in the Circuit as a Local Preacher.

A man of warm evangelistic spirit, he was always welcomed. “The man with the concertina” was always looked for. It was his joy to see many brought to God in various mission services he has shared with others, and he was very successful in protracted services and evangelistic work generally. The long journeys involved, with midnight returnings, never slackened his energy in this work.

For nearly two years our brother has been afflicted with a throat affection, which has prevented him from singing.

Brother Noake is held in great respect in the neighbourhood of his home as an expert shepherd; he knows, too, how to be a “Shepherd in Israel.” Though attendance at class meetings has considerably slackened in recent years, he visits as a class pastor should, as far as opportunity is given.

William was born in 1844 at Quidhampton, Wiltshire, to parents George and Harriet. George was a shepherd.

Note: Some records have the family name ‘Noakes’