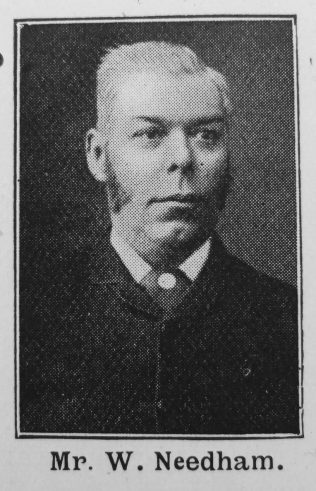 Transcription of Obituary In the Primitive Methodist Magazine by Joseph Maland

In the passing to the higher life of the late Mr. William Needham, the Bury circuit suffered an irreparable loss, and the Radcliffe Society, with whom he had been associated for over thirty years as Sunday-school teacher, class leader, trustee, and local preacher, one of Its most loyal adherents and faithful workers. He was born at Yeardley-cum-Whaley, in the county of Chester, in the 1845, ever cherishing most beautiful memories of the sweetness and deep religiousness of his early home life. His home was the abode of pure, holy spirits. When but a boy he was compelled to leave school to join the ranks of the bread-winners, but, nevertheless, continued the culture of a mind, strong and more than ordinarily observant, receptive and retentive, and by diligent training equipped himself for the sphere of business and church life which later he so efficiently filled. For a number of years he was associated with the Church of England, having received the rite of confirmation therein, an act which was to him vastly more than a mere ordnance, being a definite acceptance of Christ and solemn alliance of His Church. This early religious training created in him a deep reverence for the sanctuary and its ministry, and a passionate love for the beautiful and the ceremonial in worship, which caused him in later years to feel keenly the lack of reverence in many Nonconformist churches and the poverty of their ceremonial, and led him to endeavour to develop a greater reverence, a higher esteem for the Connexion’s ministry, and to establish a more ornate service combined with the deepest spirituality.

Mr. Needham came to Radcliffe in the year 1869, and from that year to his decease was connected with our Radcliffe Church, rendering splendid services to the school, performing the duties of the superintendency for many years with marked ability; serving his church as class leader for twenty years, within the class and in the homes of his members ever a trusty friend, wise counsellor, and reliable guide; and also rendering valuable service to the circuit as a local preacher – in his preaching tender, winsome, faithful, characterised by a simple earnestness, and ever giving intelligent expositions of the scriptures he expounded. His manly, handsome presence, his bright countenance ever made him an attractive and most acceptable supply for our pulpits.

He was at work for his church until a few weeks before the Master called him to higher service. On New Year’s Eve he preached with much earnestness, spirituality and power at the watch-night service, and on Sunday, January 27th, conducted most profitable services at Ramsbottom, the next evening attending a special leaders’ meeting of the Radcliffe Society. The following day he was seized with influenza, along with a severe attack of bronchitis, which compelled him to take to his room on the Thursday, from whence he passed away to be with Jesus, whom he so dearly loved and so faithfully served. On Wednesday morning, February 20th, as the natural day was breaking, the day that is nightless dawned upon his vision in all its splendour and rapturous delight. Throughout the short, but exceedingly severe illness, he was most patient and fully resigned to God’s will; “ready for either,” – for restoration or “to depart ” – the key-note of his life had been “For me to live is Christ”; therefore even death to him would be gain. Much time was spent in prayer and in sweet meditation, and to the suffering saint there was vouchsafed a blissful experience of the Saviour’s sustaining grace and abiding presence. When the end came he was ready, and as the Master called he passed peacefully “beyond the shadow” within the portals of heaven, into that shadowless, sorrowless land, cloudless and serene, leaving behind a devoted wife, four loving daughters, and many sorrowing friends, whose bereavement is keen and sense of loss exceedingly heavy; but their sadness is mingled with gladness for the nobility of his life and the greatness and success of his service to home, business and church. They will ever remember his manliness; he came up to the ideal of kingship set forth in the couplet indicating it to be:-
“To have power on this dark world to lighten it;
Power on this dead world to make it live.”

His moral heroism, his absolute sincerity, his wise, loving counsels, his loyalty to home, church and Jesus Christ, ennobled and purified by his gracious influence upon them, and the sweet memory and pure, Christly example he has bequeathed to them, they endure patiently their trial, thankful for the blessedness of his life and work, with the hope of joining him in the Father’s home when their earthly sojourn is ended.

Previous to the interment in Radcliffe Churchyard, a service of great impressiveness was held in the chapel, where he had so often ministered and received ministrations, conducted by the Rev. W. Graham, and in which the Revs. W. Eccles, W.J. Tristram, J. Maland, and Mr. J.S. Chatterton took part. On Sunday evening, March 17th, a largely attended memorial service was conducted by the Rev. Joseph Graham, preaching from Hebrews xi., 43, and Revelations xiv., 13. Thus closed the final scene of this good man’s earthly career, but his memory will long be cherished, his work remembered, and his influence make for righteousness. For his faithfully executed work, and the success attendant thereon, we thank God, and glory in the triumph God’s faithful servant has achieved. To him the words very fittingly may be expressed:-
“Servant of God, well done;
Thy glorious warfare’s past;
The battle’s fought, the race is won,
And thou art crowned at last.”

William was baptised on 20 April 1845 at Taxal, Cheshire. His parents were Ellis, a coal miner, and Mary.