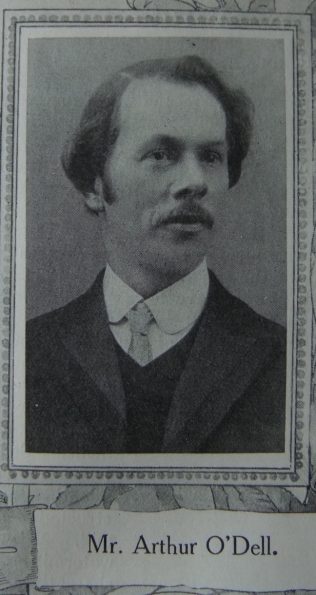 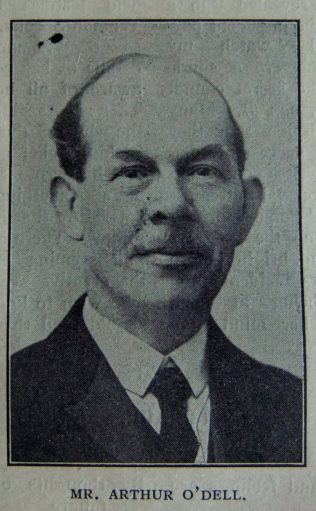 Mr. Arthur O’Dell first breathed the bracing air of the Barton Hills. As a village boy he yielded his life in consecration to Christ and His Church. While still young he migrated to the original garden city, the beautiful old town of Bedford, and for twenty-six years has been associated with our church there. With enterprise he has acquired a well-established business.

He is conspicuous for his fervid evangelism, his loyalty to Primitive Methodism, and his keen interest in the village churches. As a local preacher he renders great service, not only on Bedford II. Circuit but on several adjoining stations. He has conducted evangelistic services with gratifying success.

Though his ministries have been many and varied in the past, yet we anticipate from, and desire for, him a long life of mellowing goodness and growing influence and usefulness in the Church that he dearly loves.

Arthur was born abt 1867 at Barton-in-the-Clay, Bedfordshire, to parents Charles and Ann. Charles worked the land.

Arthur was converted in the little Barton Primitive Methodist Chapel. In his early teens he left Barton for Bedford where he was apprenticed with his uncle to the tailoring trade.  Before leaving Barton, Arthur worked as a farm labourer.

In Bedford, Arthur joined in fellowship with the Cauldwell Street Church. He became a Sunday School teacher and later School secretary. On receiving a note to preach, Arthur accompanied Jonah Cook on his appointments. For twenty years or more he conducted the once famous Camp-meeting of Clophill.