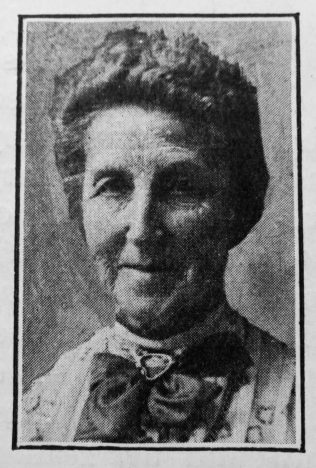 Transcription of Obituary in the Primitive Methodist Magazine by T. Elliott

The beautiful Northumbrian village of Blanchland has long been famous for its loyal Primitive Methodists. Not allowed to have a place of worship of their own in the village they have climbed the hill to Shildon and worshipped in a rented room. Chief among these loyal Nonconformists have ever been the Olivers. Mary Oliver was the daughter of the late Joseph and Mary Oliver, and sister of Mr. Joseph Oliver, of Durham. Born at Blanchland sixty-seven years ago she spent most of her life there, but her later years were spent at Blackhill and Castleside. Her end came quite suddenly on August 27th, 1906. On the same day she and her elder sister, who lived at Shotley Bridge, had a paralytic seizure, and when Mary died she was not aware that her sister had gone before her.

Many came from far and near to attend the funeral. The service in our Castleside Church was conducted by Revs. T. Elliott and T P. Ellis. Afterwards the remains were interred at Blanchland amid the peaceful scenes of her early years.

Reared in a home where the atmosphere was essentially religious Miss Oliver was a Christian of a high order. This preacher’s home was not only a place of rest for body and mind, but one whose quiet holy life ministered spiritual refreshment. Deeply interested in every part of our church work Miss Oliver was especially devoted to missions and the orphanage. To attend District Meetings and Conference was her great delight.

The Rev. J. Hallam says: “Her parents’ house was my home when at Shildon, and Mary was the kindly angel that anticipated my needs. She was in many respects the very soul of the society, and seemed to breathe energy and life into the others when they appeared to lose heart. Tall in stature and graceful in figure, with clear-cut features and restless mind, gifted with business talents and aptitudes, there was no sitting at ease in Zion, and yet her influence was wielded with true womanliness. She was an intelligent Christian and a loyal daughter of Primitive Methodism. I remember her generous help to every chapel property in the Hexham circuit. She was one of the best women earth has ever seen, and is now before the Throne.”

Rev. H. Yooll writes: “My acquaintance with her extends over many years to my early days as a local preacher. All through these years I have known and greatly esteemed her as one of the finer Christian spirits of my acquaintance. Hers was a most exemplary and attractive character, a fine blend of sweetness and light. She had a deeply spiritual and contemplative mind, and reminded one of that other Mary who sat at Jesus’ feet and heard His words; and yet she was something of a Martha, too, in her hospitality, her care for the Lord’s servants, and her zealous and active interest in the welfare of the church. Truly she was one of the King’s daughters, a corner stone of a palace.”

Her departure is deeply mourned by our church, and by Mr. Hutchinson, for whom she cared from childhood, but we are all filled with a quiet assurance of meeting her again.

Mary was baptised on 19 May 1839 at Blanchland, Northumberland. Her parents were Joseph, a grocer, and Mary.

Mary carried on the grocery business after her parents death. The Mr Hutchinson referred to in the obituary was a nephew.