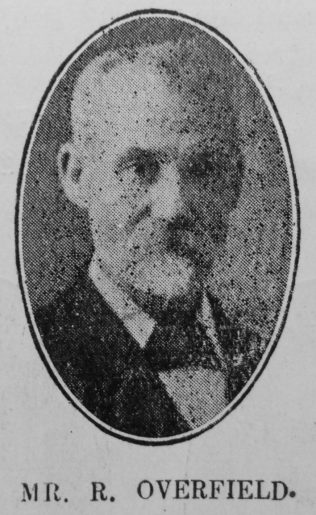 The “passing” of Mr. Overfield came as a great shock to Queen Street Church. Only a few days before he was in comparatively good health, but having sat in a sick chamber after a heated service in his church, he contracted a chill from which he never rallied. We could ill afford to lose him. From the religious standpoint he was a tower of strength. How he could pray! Upon him rested an unction which gave power to his intercessions. For many years he was the life and stay of Witton Lane Society. For twenty-one years he laboured in Queen Street School. Of his generous gifts of clothing. boots, etc., to the necessitous poor many can speak. In him no atom of selfishness dwelt. He lived for others, and of others’ comfort he thought when he might have thought of his own.

It was on Sunday, August 25th, 1907, in his sixty-fourth year, that his pure spirit passed within the veil. The young people for whom he toiled were bewildered with the news. At his funeral no eye was dry. He has left behind him children who bitterly mourn his loss. To his memory children and friends placed a marble slab in the school, and none can ever look upon it without thinking of the generous love which moved and throbbed within the heart of our beloved friend.

Richard was born abt1844 at Shefnal, Shropshire, to mother Ellen. He was baptised on 28 January 1844 at Shifnal.