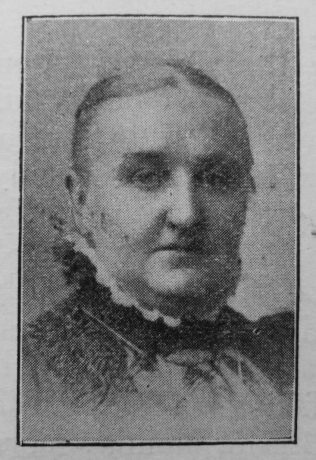 Transcription of Obituary in the Primitive Methodist Magazine by Jas. Shaw

Mrs. Osborne, wife of Mr. Samuel Osborne, oyster merchant, Cleethorpes, passed away. January 23rd, 1905, in the fifty-eighth year of her age. She was born at Humberstone, a village about three miles from Grimsby, August 18th, 1846, and spent the whole of her married life in Cleethorpes. Her maiden name was Ruth Benton. She was a relative of the family of that name which has taken such a deep interest and done so much for our church in Grimsby.

Mrs. Osborne was above everything else a godly mother. Nature had endowed her with deep religious instinct and unfailing faith in the supernatural. There was a sense in which she was naturally good. She had a religious nature in a special degree. Piety was the bent of her life. She lived and moved in the everlasting light and love of God. In trouble, and she had a great deal, she leaned hard upon God.

Mrs. Osborne’s deepest desire and highest ambition was that her children should be good and useful in life. Her husband shared fully with her in this laudable desire, and few parents have so steadily and for so long kept such an object in view. The trial of their faith at times was great indeed, yet they were cheered and inspired with some fruit, for their second son, the Rev. Joseph Osborne, M.A., is a Congregational minister, and has charge of a church at Northampton.

The House of God, and all that it stands for, had a deep and constant interest for Mrs. Osborne. Time, money, and service, she never grudged to promote the prosperity of Zion.

The Rev. J. Phillips, one of the many ministers who have written letters of sympathy to the family, says: “Mrs. Osborne was no ordinary woman. Those who were privileged with her friendship were impressed with her cheerfulness of spirit, natural kindness of heart and sterling, unobtrusive piety.”

The Rev. J. Hall observes: “We often talk of her prayers in the Sunday evening prayer meetings, What a rich power there was in them.”

The Rev. R.W. Keightley writes: “Our long acquaintance with Mrs. Osborne leads us to a very high appreciation of her quenchless zeal for every good cause. A church of such temperance enthusiasts as she would make short work of our national curse.”

The Rev. G.F. Fawcett, of the Elmfield College, York, says: “Mrs. Osborne was one of the most spiritual and devout of the women it has been my privilege to know. Hers was a religion peculiarly unobtrusive yet absolutely unmistakable.”

Mrs. Osborne did not entertain the foolish notion that ministers are angels, but she esteemed them highly as the servants of God, and for their work’s sake. She was ever ready to cheer, help, and do anything in her power to make their task easy and their work prosperous.

The sympathy and help of Mrs. Osborne were not confined to her own church and ministers. She had a kind heart and a helping hand for others.

The Rev. Joseph Philips Hawkins, the Rector of St. Mary’s, Grimsby, writes to Mr. Osborne: “I was unwilling to obtrude on your grief sooner, but I was anxious to say how much I liked and respected Mrs. Osborne, and we were great friends and rarely differed in our views in her whole-souled work on the Board of Guardians. She was often a firm supporter of me in my efforts on behalf of my people.”

The Grimsby Board of Guardians speaks of her as a “tried and valuable colleague, one who was devoted to the labours of a Poor Law Guardian.”

The poor, the afflicted, the troubled and the unfortunate, had in her a true friend. “She was to me,” says one, “such a friend in time of great sorrow as is rarely met with.”

While she was a vigilant member of several institutions such as the National British Temperance Association, and had the honour to be the President of a Branch at Cleethorpes, yet she did not sink her individuality in them but with or without organisation she steadily worked out the purpose of her own life. The Relief Committee of Cleethorpes at their first meeting after her death passed the following resolution: “We deeply regret to have to record the death of Mrs. Osborne, who for so many years was a member of the Committee, and who did such excellent work upon it, and we place on record our high appreciation of her long and valuable services.”

The end came with startling suddenness. A chill was taken. A few days of severe illness, and all was hushed in the stillness of death.

The funeral took place at Cleethorpes Cemetery, January 26th, amid wide manifestations of sympathy from a large gathering of friends. The cortège proceeded to our chapel, where a short service was held, and from thence to the cemetery. The officiating ministers were the Rev. J. Hodges and the Rev. J. Foster. It was the wish of Mrs. Osborne that there should be no floral emblems, but that was a touching act, when as the chairman of the Board of Guardians took his last look into the grave he took from his coat a leaf of ivy and dropped it on the coffin lid. The action was significant. It then spoke the feelings of many, and it will still speak of those thirty-eight years of faithful and beneficent service rendered by the departed to humanity and God, the memory of which will remain fresh and green for years to come. For things noble and good never perish.

Ruth was born to parents Joe, a carpenter, and Mary.