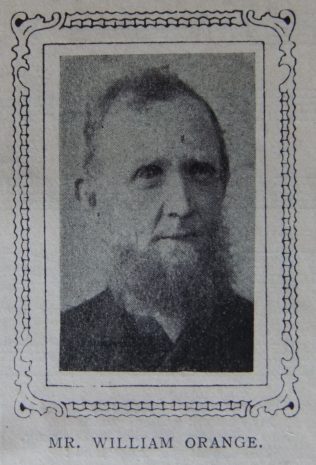 WILLIAM ORANGE is a saint, not of the cloister, but of the stocking-frame. Spiritual things are to him the things of life. He has grown a character of rare charm and beauty. Either he has found it easier to cultivate the spiritual life than some have, or he has given more attention to it; for a character like his is none too frequently seen. Though he is over seventy years of age he is youthful in spirit and outlook. He finely unites grace, and truth, and service. For fifty years he has been a member of our church at Woodborough, on the Nottingham Fifth Circuit, where he was born. For fifty-nine years he has been Society steward, and has watched over, and worked for our interests with vigilance and devotion. For many years he has been a Class leader, leading his members in faith and works. He sometimes expresses regret that so many men of the later generations have had to leave Woodborough, but thanks God that so many of them are helping our church in other places, and has a proper pride in telling you that Woodbridge has had its representatives on the foreign field. He has great interest in our mission work, both at home and abroad; and no Connexional Institution is outside his sympathy. His words are good, but his life is better, and it is characteristic of him that his contribution to the Centenary Fund was almost double his first promise, and, by the prompting of his own heart, was all devoted to the Central Fund. He was a delegate to the Conference at Newcastle, and since then has never had a doubt that the Primitive Methodist Church is the finest in the kingdom, and that its ministry is unequalled. “At even-time it is light.”

William was born abt 1838 at Woodborough, Nottinghamshire, to parents Samuel and Ann. Samuel was a frame-work knitter.

William worked as a frame-work knitter.

Note: Some early records are in the name “Orringe”