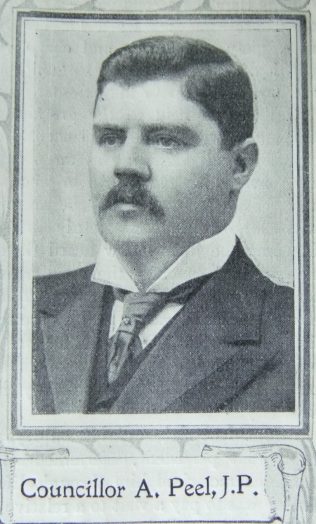 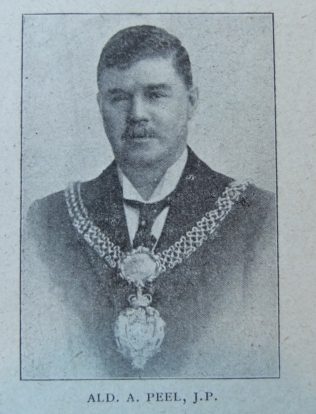 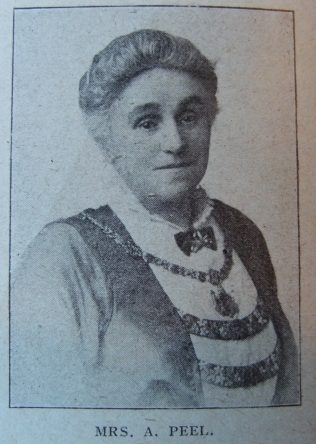 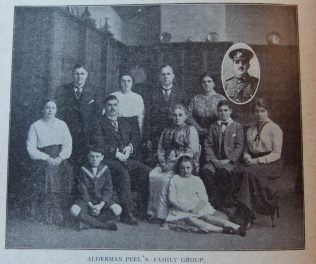 Councillor Peel has been steward of Bradford Fifth since its inception in 1896, and from his earliest years honourably associated with our Dudley Hill Church, to which he has unstintingly given his best aid, in the Sunday School, particularly, doing noble service, whilst many handsome gifts witness to his liberality. Friendly with all churches he loves his own the best. Entering the City Council, as the first Primitive Methodist, in 1896, his rare devotion to education and all that concerns social progress has given him a place of high honour and the esteem of all parties and more than that of the Liberal party whom he serves as chief whip with marked efficiency. As a large employer of labour his relations with his workpeople are of the friendliest description. In the prime of life we anticipate for him increasing usefulness crowned with the highest honour his city can bestow and distinguished connexional recognition.

Abram was born in 1864 to parents Samuel and Bethia. He was born in Rooley Lane, near the Dudley Hill Church, at Bradford. His father was a miner and his mother a weaver.

At seven and a half years of age Abram was working in a mill as a ‘half-timer’.

Abram was converted at a week-evening service. On the evening of the day when Rev. T. Dearlove was interred the Rev. Mark Knowlson, the second minister, was planned at Dudley Hill, but could not get back from the funeral in time. Seven people turned up for the service, including a lad of sixteen years of age. They were about to depart without having any meeting when an elderly man, David Worsman said, said, “We’ll never break off without having a meeting of some sort. Let us have a prayer meeting”! Like true Primitive Methodists, they had a prayer meeting and in that little gathering the lad, Abram Peel, gave his heart to God.

At the Dudley Hill Church, Abram was superintendent of the Sunday School for thirty-five years, from the age of nineteen.

Abram was the chairman of the Arrangements Committee for the Bradford Conference in 1910. He also became a director of Elmfield College.

Abram became one of the leading captains of industry in Bradford. His chief concerns were Abram Peel Bros., Ltd., a branch of the British Cotton and Wool Dyers’ Association, Ltd., and Robinson and Peel, Wool Combers, Recta Mill, where he was in partnership with his friend Alderman G.H. Robinson, J.P., his bosom friend.

Abram became an Alderman in 1904 and was appointed a magistrate in 1906. He was elected Lord Mayor of Bradford in November 1916.