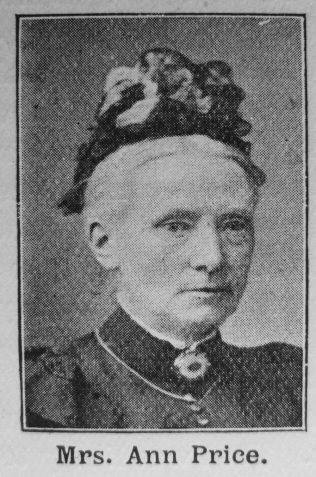 Transcription of Obituary in the Primitive Methodist Magazine by J. Charlton

By the death of Mrs. A. Price another link connecting us with the middle period in the history of Cwm Circuit has been severed. She was the last of a remarkable family that played an important part in the consolidation of Primitive Methodism in West Herefordshire, and to whose unswerving loyalty and devoted labours our Church owes much. Mrs. Price was born in 1830, and was the youngest, daughter of Mr. John Gwillim, yeoman farmer, late of Sunny Bank, Longtown, her mother being a daughter of Rev. J. Rogers, vicar of Clodock parish. In those early days few Primitive Methodist Chapels existed, and Mr. J. Gwillim with others opened their homes for preaching services. Thus in early life his family was brought into contact with preachers of evangelistic fervour and missionary spirit. One son (Rev. W. Gwillim)  became a minister of our Church, while another son became an acceptable local preacher. When a girl of fifteen, Miss Ann was soundly converted, and being of a bright active temperament she entered with zeal into the services of the Church, and became a life-long member. During her long connection with the Church, she witnessed some great evangelistic triumphs in the various revivals that swept over the country side, and was to the end interested in the conversion of those about her.

Mrs. Price was a capable business woman. Soon after her marriage, she began farming on her own account and was very successful. In the course of her farming career she resided in various parts of the Cwm Circuit, and in every case became an active worker in the society nearest her home.

Intellectually she was gifted above the average, and this was seen in her hold on the verities of our faith. Her decision for Christ was largely due to conviction of the scripturalness and reasonableness of Methodist preaching, and in time she became an able exponent and defender of our principles. Apt and ready in conversation, and fond of discussion, she delighted in talking over theological and Biblical subjects. She was well read in Methodist theology and history, and in public address and private visitation had great influence, her opinions commanding the respect of her hearers. It was her habit in late years to continue the study of the texts used by the preachers on the Sabbath day, by consulting the commentaries of some of the old divines.

Hers was an eventful and trying life, yet amid all changes and domestic difficulties, her religion was the mainstay of her soul. For some years she taught and superintended the Sunday School at Newton, and her home was always open to the preachers, travelling and local alike were welcomed. She delighted in their company and would give the conversation a profitable turn. She stood by the ancient landmarks in teaching and polity, and questioned the efficacy of some new methods of Church work, yet after a few visits became a member of the Christian Endeavour Class and was greatly interested in the movement. Her contributions to the discussion of the topic were able and timely and were looked for by the members of the class. During the last few years she took occasional services in our Chapels, and always prepared carefully for such duties. Always a constant attendant at public worship, she took part in a prayer meeting within a fortnight of her death. After a short illness she passed away on the 15th day of March, 1902, at the full age of seventy-two.

Ann was baptised on 28 July 1830 at Clodock, Herefordshire.

Ann married Abednego Price (b abt1826), a mason, in the summer of 1850 in the Hereford Registration District. Census returns identify one child.