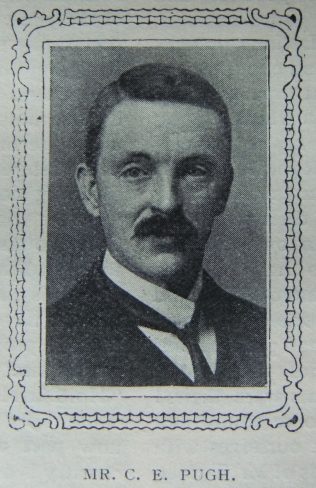 Mr. C.E. PUGH was born in Liverpool, whither his parents had gone to reside, but while he was yet quite young, they removed to Welshpool, where they still live.

He is a Primitive of the third generation. His paternal grandfather was a consistent member of our society at Hope, forty-six years, most of which time he was also a useful local preacher and Class leader. His father – Mr. C.T. Pugh – will doubtless be remembered by his early associates and fellow-workers in Liverpool. His name has long been on the Welshpool Circuit Preachers’ Plan; though of late, owing to ill-health, he has not been able to do much work. Civically, he has had the honour of being elected three times successively as Mayor of the borough.

The subject of this sketch has thus been cradled in Primitive Methodism, and to the advantage of a godly parentage there was added the invaluable aid of the Sunday school. Above all he was, from his earliest days, deeply sensible of the operations of the Holy Spirit and became the subject of His inward and saving power. Saved thus in early life from the grosser vices and entanglements of an ungodly world, his connection with our people has practically been life-long.

Being of a quiet, retiring disposition, he never pushes himself to the front; but realising how much he owes to Christ and to the Church in which he has been reared, he is ever placing his varied gifts and acquirements at the service both of that Church and of his Divine Master.

He has for many years efficiently filled the position of organist in his church – the Welsh extraction and the inhaling of the bracing air of these hills probably enhancing his natural fitness for this post. For several years he has also been Society Steward, evincing a deep interest in the cause of Christ.

Charles was born in 1872 at Liverpool, Lancashire, to parents Charles Thomas and Mary Ann. Charles, senior, was a builder.

The 1911 census reveals that Charles earned his living as a cabinetmaker and house furnisher.