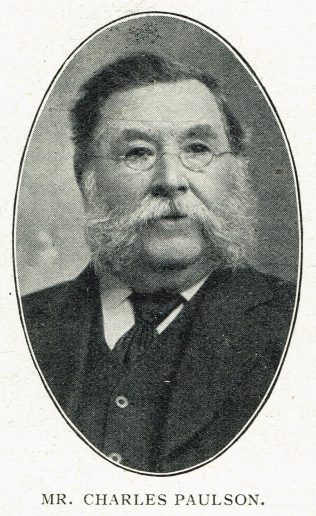 The John Street Church, Worksop, has suffered a great loss in the death of Mr Charles Paulson, on March 14th 1926, at the age of seventy seven years.

He held the position of Society steward at Edwinstowe, afterwards being for several years class leader at Thirlcoales, and then removing to Worksop, where he joined our John Street Church. He was a trustee of all our chapels, and treasurer of our new church at Rhodesia.

He was a man greatly beloved by all – kindly in disposition, and on friendly terms with  rich and poor. He never spoke an ill word of anyone, and was always consistent and trustworthy in all his business transactions.

His love for Primitive Methodism was very deep, and his happiest days were those spent in its services. He gave one son to the ministry – the Rev W H Paulson. He was seldom absent from Sunday morning worship.

In his home life he was tender and loving, ever seeking the welfare of others. He was without a shadow of pretence or affectation – and he waked daily and humbly with his God. His pure and stainless memory is an abiding possession.

The funeral service was conducted by the Rev R Heppenstall, who gave an address, and afterwards his remains were laid in the New Cemetery in the presence of a great number of friends and Church workers.

Follow these links to find out more about his family and connection with Edwinstowe.