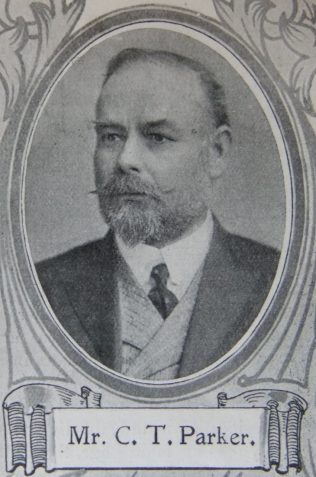 The Senior Circuit Steward of the Lincoln First Circuit was born at Osbournby, and came to Lincoln thirty-two years ago. He started in business for himself as a grocer and provision dealer. On taking his present premises there was a beer licence attached thereto, which on ground of principle he gave up. During this time he has been connected with the Lincoln Portland Place Church. He has been School Superintendent for about ten years. For some years he was assistant Circuit Steward to the late Mr T. Clark, and on his decease three years ago was appointed Senior Steward. He is Society Steward at the High Street new Church. A member of the City Council for seven years, he was returned in November last for a third time. At present he is Chairman of the Parks and Cemeteries Committee. He has one daughter married to Rev. J. Southall and another to Rev. W.B. Belborough.

Charles was born abt1859 at Osbournby, Lincolnshire, to parents John Francis Parker and Ann Handley. John was a tailor.

Charles served as Mayor of Lincoln on five occasions.