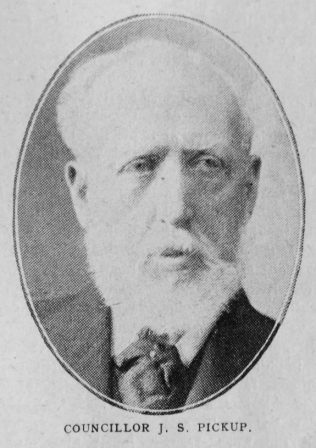 Transcription of Sketch In the Christian Messenger

There are some men in our Church whose worth we can never fully appreciate. They have carried the burdens of the Church so long that they have become to us part of the institution. We do not know the Church without them. Their service has been so unremitting, their zeal so spontaneous, that we have come to look upon them, not as the servants of the Church, but as proprietors. But, even in this seeming lack of appreciation, there is implied a deeper tribute. Of most of us it may be said, that we belong to the Primitive Methodist Church. Of these men we might almost say that the Primitive Methodist Church belongs to them.

Councillor John Scott Pickup, of Helmshore, who has just completed his jubilee as a local preacher, must be numbered amongst these stalwarts. In the Nonconformist life which spreads over this part of industrial Lancashire, there is no more popular figure than that of John Scott Pickup. His services have been readily given, not only to his own Church and Circuit, but to the Churches and Missions of almost every denomination. As he jokingly said a short time ago: “When I have done my best at Jerusalem, then I have gone out to the Gentiles.”

The name of Pickup is inseparably associated with the Helmshore Church and the Helmshore Circuit. When that Pioneer of Primitive Methodism, Rev. John Verity, came to Mission Helmshore, and requested the favour of an old hay barn to sleep in. it was the grandmother of J.S. Pickup who took him in, and gave him the hospitality of her own home. Before a Society was formed at Helmshore, Richard Pickup, the father of John Scott, journeyed to the Chapel, in the neighbouring town of Haslingden. When Helmshore became a Circuit in 1866, Richard Pickup was one of its founders, and one of its first local preachers. The present Church at Helmshore, erected in 1895, contains a beautiful window, placed there to the memory of Richard Pickup.

Born at Helmshore in 1853, John Scott Pickup has a life-long connection with the Church there. One of his early recollections is that of going to a Camp Meeting in charge of a donkey and cart. On the cart sat one of the oldest pioneers of Primitive Methodism in Lancashire, the Rev. George Herod. At the age of fourteen years, Mr. Pickup became a member of the Church, and, under the care of the Rev. Fred Smith, he began to preach when he was eighteen. For forty years he has been Society Steward of the Helmshore Church, and for forty-five years a Sunday School teacher. On a few occasions he has been delegate to the District Synod, and in 1901 he represented the Manchester District at the Sheffield Conference. Since losing his wife, twenty-two years ago, which was a severe blow, Mr. Pickup has had the great comfort of seeing his children – two daughters and a son – taking up the work of the cause he loves so well. For nineteen years his son, Rev. Holden Pickup, has been in the ministry. T. NUTTALL.

John was born in 1853 at Helmshore, Lancashire, to parents Richard and Ellen. Richard was a farmer.

John earned his living as a grocer.