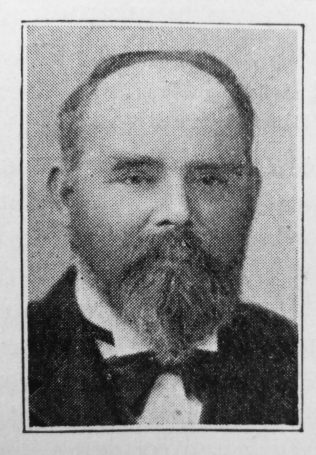 The Worcester Circuit in general, and Broughton Society in particular have sustained a serious loss by the death of Bro. Daniel Panter. He was a native of Drakes Broughton and spent nearly the whole of his useful life in the neighbourhood. For some thirty years he was in business as builder and contractor, and carried out important works for the Great Western Railway Company, H.M. War Office, etc. He also built several Primitive Methodist Chapels and Schools in this district and in Wales.

Brother Panter was converted in the Wesleyan Chapel, Pump Street, Worcester, while yet in his teens, but practically the whole of his religious life was associated with our Broughton Society. He was a member for some forty years, Sunday School Superintendent thirty-four years, Local Preacher thirty-two years, Circuit Steward many years, member of District Committees, and had been a delegate to Conference. In every capacity he was much esteemed and fully trusted.

In the pulpit he was always interesting, earnest and persuasive. There was not much noise, but unmistakable power. As class leader he was faithful and sympathetic. He could speak to troubled hearts, because his own heart had known trouble. His prayers were a benediction, they breathed the spirit of the Cross.

But it was in the Sunday School that Bro. Panter was most at home. He loved childhood, and childhood loved him. His influence on the young was visible. He helped the village lads by wise counsel and the loan of useful books. His quick eye saw at once the signs of piety, and nothing cheered him more than to see the young engaging in Christian work. Brother Panter loved his Church fervently, and the best he had of time, talent, and substance was freely given. In the darker days of Worcester Circuit he was ever loyal. He and his good wife found real pleasure in opening their door to the preachers. He was known as the “ministers’ friend.”

The kindly eye, the gentle voice, the gracious manner, bore testimony to the inner nature of the man.

As husband and father he was kind, patient, thoughtful. As a Christian man he lived more than a formal life.

Amid business anxieties he could find time to converse about spiritual themes. He had his troubles. The sad death of his son William almost staggered him, but he bore it without complaining. For some months before the end came his affliction was severe. He knew the inside of the furnace, but never faltered in his steady trust. Those who visited him towards the end found him resigned, and ready for any change. On Sunday, November 20th, 1904, his last active Sunday on earth, he lighted the schoolroom fire, attended class meeting, and gave what proved to be his farewell address to the school children. He went home feeling very ill; medical skill and tender nursing did everything possible to prolong his days, but the dreaded event drew nearer. He was quite conscious all through, and passed quietly home to God on Sunday, November 27th, at the age of sixty, his hands clasped in the hands of his two sons, Thomas and Charles. Our brother leaves a widow and nine children, five sons and four daughters, most of them members of our Church, the eldest daughter being the wife of the Rev. Wm. Overton, the esteemed minister of West Bromwich First Circuit.

The mortal part of Brother Panter was borne to Pershore Cemetery amid signs of general regret, and carried to the grave, beside his son William, by his employees. The circuit minister conducted impressive services in our own chapel and at the grave.

On Sunday, December 4th, an In Memoriam Service was held in the chapel, conducted by the writer, and proved helpful to the family and the large congregation.

Mrs. Panter and her children have been much comforted in their sad trial by many expressions of sympathy, the letters from the Revs. Theo. Parr, M.A., for the District Committee, Harvey Roe, J.E. Hughes, W. Pedley, J.W. Ullyatt,  former ministers of the circuit, being much appreciated.

In their great sorrow they are sustained, and look forward to eternal union in the home beyond.

Daniel was born in 1844 to parents Thomas, an agricultural labourer, and Harriet.

Daniel married Louisa Harris (abt1848-1914) in the spring of 1866 in the Worcester Registration District. Census returns identify ten children.