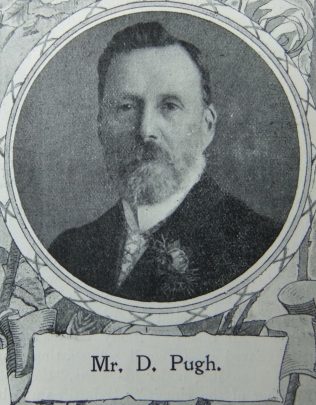 Mr. D Pugh, of Hope, Welshpool Circuit, was born of pious parents, both of them being members of our church, his father being also a useful local preacher and generous giver.

Converted early in life Mr. Pugh received his first class ticket February, 1859, and in due course became an accredited local preacher, in which capacity he has laboured acceptably and successfully. Elected Station Steward September, 1872, he has honourably filled this position ever since. Of a retiring disposition he never seeks office or honours; but when given to him they are sacredly held and rightly valued. He has several times been a Delegate to District Meeting and has once represented his District in Conference. He gives liberally and regularly attends all the services, and is highly esteemed. His devoted and faithful wife is now “with Christ:” God be with him till they meet again.

David was born in 1844 at Leighton, Montgomeryshire, to parents David and Margaret.

David died in early 1939 in the Welshpool Registration District.