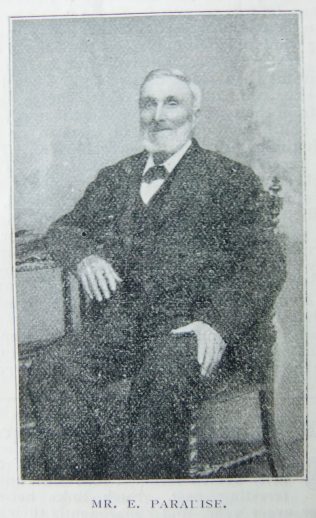 Transcription of Sketch in the Christian Messenger by Samuel Harry

The brother who is the subject of this brief sketch forms a link with an interesting past. Such links become fewer every year, and consequently their reminiscences assume the value of rarity. But this is not the only value attached to their testimony. How much of the romance and thrilling interest associated with the earlier days of the Connexion are discoverable, not merely from its written histories and biographies! Its histories are necessarily taken up chiefly with main lines of development, while its biographies are often too conventionally literary, for there is a conventionalism even in biography. To properly appreciate the past, one must catch one of these unconscious humourists in a happy mood, and quietly listen as half-buried memories come welling up, and the peculiarities of those by-gone days are hit off with a kind of native genius, mingling pathos, irony, and quaintness, all rendered more vivid by the very spectacle of the worn frame before you, an expressive supplement to the tale which is being told.

Mr. Edwin Paradise is well known in the Forest of Dean, having been engaged in preaching the Gospel through its length and breadth for 57 years. He is now nearing his 80th birthday, and until quite recently his was a familiar figure in the various pulpits of the neighbourhood. It is feared that his work is now done, however, age and affliction confining him to his home. Thinking that a brief notice of such a useful life might be appreciated by the readers of ‘The Christian Messenger,’ I have succeeded in gleaning a few facts.

Mr. Paradise was born in April, 1821. He was brought to the scene of his future life and labours in the Forest of Dean when he was nine years of ago, his parents coming to Viney Hill to live. He first attended the Baptist school at Blakeney. We associate grave inconveniences in worship, as well as ingenuity in overcoming them, in more modern times at least, with enthusiastic Methodist societies, and rightly attribute a special share to our own Connexion. But the Baptists of that time and place had their share. The congregation occupied both bedrooms and the kitchen of the minister’s house, while the preacher stood on the stairs. Thus our brother’s connecting himself later with the Primitive Methodists did not involve such a sacrifice of material comforts as many had to submit to. In 1842 he began to attend the services of the Primitive Methodists at Viney Hill, being specially attracted by the lively, enthusiastic singing. Much of the power of those early days must be attributed to the singing, and this really led the subject of our remarks to the Saviour. Twelve months after his conversion he became a local preacher. His first attempt was made under circumstances which often called forth the latent in those days. If the preacher did not appear, the congregation did not think of dispersing without a service. .

Bro. Paradise was first induced to preach on such an occasion. That first effort is still very fresh in his memory. Some one afterwards asked him how he divided his text. His answer was, ‘Not at all. I simply began at one end and kept on until I got to the other.’ He probably kept to his text at any rate. We remember an old preacher who used to call his text his ‘starting-point.’ Although a mere lad, the expression seemed to me appropriate, for no sooner was the text announced than he would immediately ‘start’ from it, while nobody expected him back again. That first sermon was sufficiently satisfactory, however, to induce the circuit authorities to place his name on the plan. His first regular appointment was at a place near Monmouth, ten miles away. He was getting ‘seasoned’ at once. Those were the days of large circuits. What are now Monmouth, Lydney, Pillowell, and Lydbrook Circuits were all comprised in the Monmouth Station, which was sixteen miles in length and from four to five in breadth. Our brother used to traverse it on foot from one end to the other. He once took note of three successive Sundays, in which his journeys averaged twenty miles for each day. If, by-the-by, Mr. Paradise had been a travelling preacher, he would have paid far more attention to his journal than some of us. He keeps account of everything of any note. A glimpse at his record furnishes me with the following items:— ‘Preached 2,544 times. Walked for the purpose 8,730 miles. In possession of every plan from 1860.’ And all this not upon macadamised roads. The inhabitants of the forest tell you that the roads are ‘better than they were.’ We almost need some old lady’s power of ejaculation to adequately express our feelings upon hearing such a statement. Let the modernised, elegantly-booted pedestrian attempt the forest even now after a snow-storm. On inquiring the ‘way’ to one of our chapels a short time ago, I was rather dubiously told, ‘Well, there is no way.’ We do not, of course, forget the few decent roads more recently constructed, which, however, are somewhat suggestive of a journey to Land’s End via John O’Groats. They were made for persons of leisure and endurance. Often were Our friend’s stockings soaked with more than perspiration. There was literal ‘resisting unto blood ’ with elements and bad roads, at any rate. Yet there were people then who said the local preachers went for ‘bacon.’ It would need a rare quality of the commodity to compensate for such toil, even when they got it, which was by no means invariably the case. In fact, one of the most trying features of their work was the inconsideratness they often met with in this respect. Of this, Bro. Paradise would have much to tell if he chose. Some memories of another nature still make him smile. One man whom he visited did not believe in the ‘Ranters,’ because they said ‘Hallelujah,’ ‘glory,’ ‘amen,’ and such like. What ‘amen’ signi?ed he did not seem clearly to understand until his visitor explained. But he consented to a few words of prayer, and when they were ended, responded with a sonorous ‘amen.’ He had become so far a Ranter in the meantime.

Bro. Paradise has taken a very active part in the development of Primitive Methodism in the neighbourhood. When he commenced his work there were only three chapels in the forest, viz:— Pillowell, Ellwood, and Lydbrook. Now there are sixteen, of which he has missioned nine.

The Pillowell Circuit considered our aged friend a very fit subject for the bounty of the Aged and Necessitous Local Preachers’ Fund, which readily responded to the appeal. That such a fund, instituted to help such deserving cases, should not meet with very hearty support, is not creditable to the Connexion as might be.

Edwin was baptised on 11 March 1821 at Berkeley, Gloucestershire. His mother was Mary Paradise.

Edwin worked as a coal miner.

He married Sarah Griffiths (abt1819-1877) in the spring of 1843 at Awre, Gloucestershire. Census returns identify six children.

Edwin married Mary Hodges, nee Tillings, (abt 1820-1897) in the spring of 1878 in the Monmouth Registration District (which covers West Dean, Gloucestershire).