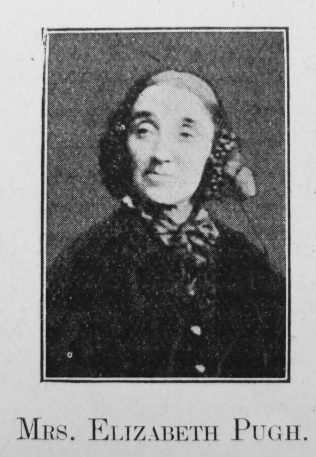 Transcription of Obituary in the Primitive Methodist Magazine by W Perry

Mrs. Pugh, relict of the late Samuel Pugh of Coedylade, was the daughter of John and Elizabeth Weaver, and was born February 1st, 1824, at Upper Rowley, near Worthen, in the Minsterly circuit.

John Weaver had had no education, and being painfully conscious of the disadvantage which such a fact involves, determined that his two children should have as much schooling his slender means afforded. She was sent to school until she was fourteen years of age, which was an exceptional thing in those days when wages were small, and school fees high. On leaving school she was sent to learn the boot binding, which was at that time a considerable industry.

In the year 1844, when she was twenty years of age, she was converted under the ministry of the late Rev. E. Morris, who was well known in the Tunstall District. Our members had to endure much persecution, and she being the only member of the family who had joined our infant church, was much wondered at, and opposed. Her most determined persecutor was a cousin, Richard Weaver, who in after years was so popular and successful as an evangelist.

She held on her way in spite of all opposition, and was soon put on plan as a preacher, and from then, 1844, to the time of her death, 1904, she did the work of a local preacher, with great acceptance and not a little success. The places were small and distant, and the roads bad, but she was faithful to her trust, and has been known to travel to her appointments with a child in her arms – such devotion and duty is above all praise.

In those early days she was in request as a preacher for special services, and in the year, 1848 she was fulfilling a special engagement at Leighton, in the Welshpool circuit, when she saw for the first time a ruddy-faced young man of twenty-seven years, also a local preacher, who believed that God had sent them a preacher, and had sent him a wife in the person of this young woman. In two months time they were married and lived together, sharing each others’ joys and sorrows for the long period of fifty-five years and eight months.

She was a good wife and mother, and scarcely a week in those long years that she did not help by her earnings to solve the problem which often arises, how to make two ends meet. During her early years she kept a dame school and three of her former pupils were present at her funeral, one of them being the present Mayor of Welshpool, Mr. C.T. Pugh, a local preacher and circuit secretary.

She was liberal considering her scanty means; she never turned the needy away. Her father, who had fought and was wounded in the American War of Independence, had imbued her with a spirit of loyalty. She had lived in the reigns of four monarchs.

She passed away peacefully, painlessly, as the sun was setting, on the evening of June 18th, in the quiet lovely hillside cottage, where for so many years she had lived her wedded life, with him who had pre-deceased her by only four months, she fell asleep in Jesus and rested from her labours.

Elizabeth was born to parents John, an agricultural labourer, and Elizabeth.

Elizabeth worked as a dressmaker before her marriage.

Elizabeth died in the spring of 1904.