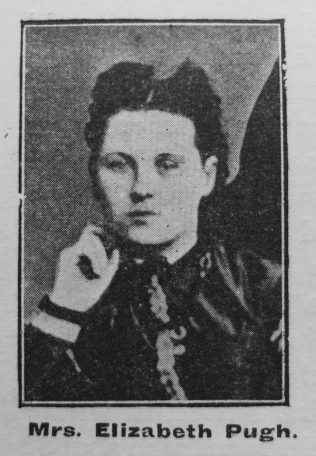 Transcription of Obituary in the Primitive Methodist Magazine by Alfred Smith

Mrs. Elizabeth Pugh was born at Wigmore, in the parish of Westbury, January 1st, 1884. From very early life her health was delicate but she lived long enough to do a great amount of good, and to impress her character upon the Welshpool Circuit. She was fifty-nine years of age when she died.

At the age of seventeen she became a member of our Church at Wattlesborough, in Minsterly Station. For a few years she lived in Shrewsbury and in Oswestry, but continued her membership in our Connexion. During her early years she was a hard working and successful collector for our Missionary Society, travelling far over rough country roads, not allowing her delicate health to interfere with this Christian duty. This spirit of love for missionary work never left her. Even when she did not collect in her later years, she was a regular contributor to the funds; and besides this she gave to and collected annually for the Orphanage, serving on the ladies’ committee, and in others ways promoting the interests of this institution. In the year 1870 she became the wife of Mr. David Pugh, and they both laboured for the extension of Christ’s Kingdom. When our sister came to live at Hope, there was but one chapel in the Welshpool Station; now there are five, to each of which she contributed and otherwise assisted. She left sums of money to Hope, Buttington, and Welshpool Chapels. These acts of her life are good and generous, but her piety and Christian example speak more effectually than her gifts. There was not only the giving, but the living for Christ. She was fully given up to Him “she loved, though she had not yet seen.”

Her home was always a place of warm welcome for all the servants of Christ, ministers or local preachers. Letters of admiration for her character, and condolence for her husband, were sent by a number of ministers and friends.

Her illness was of a long and painful nature, and she must have suffered much from pain and weariness of spirit, all of which she endured with patience and trust in God. Husband and wife were entirely devoted to each other, and all that could be done for her by medical skill, and kind and loving nursing, was done, but the time was come for her to go, as the physical powers were worn out, and the house was to be taken down. She said, “Goodbye, I am going to Jesus.” The final struggle with death was difficult, but the sting was removed and all was well.

The service at the house was, as it should be for such an one, beautifully hopeful, and solemn.

She was buried at Buttington. All felt “Blessed are the dead who die in the Lord.”

Elizabeth was baptised on 14 January 1844 at Westbury Shropshire. Her parents were Samuel and Hannah.

She married David Pugh (abt 1844-1939) in the summer of 1870 in the Atchem Registration District, Shropshire. Census returns identify one child.

David worked as a joiner. By 1891 the family has also commenced a grocery business.

Elizabeth died in the summer of 1903.