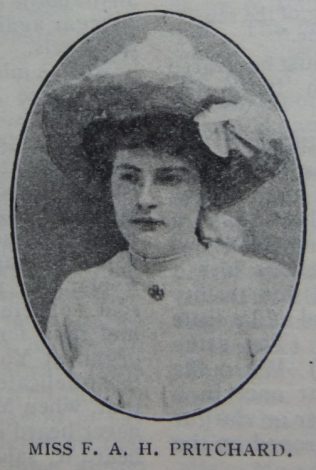 Our church at Great Bardfield has suffered a great loss by the death of Miss Florrie Adele Havergal Pritchard, youngest daughter of the Rev. E. Cook Pritchard, J.P., of Great Bardfield Hall, who passed away on April 12th, 1907, after a very serious operation.

Our departed sister was born at Standford House, South Brisbane, Queensland, when the family were living there, on July 18th, 1888. From earliest years she revealed a thoughtful, tender and pious disposition, and never seemed so happy as when engaged in the work of God, and serving others.

It was during a revival of religion in our Great Bardfield Church about four years ago, during the ministry of the Rev. C.R. Bower, that our dear sister publicly confessed Christ, since when she has taken a very active part in various departments of church work, especially in connection with the Sunday school and C.E. Society, and as assistant organist at her church, whilst her pure life and cheerfulness have ever been an example and inspiration to those by whom she was surrounded.

The funeral took place on April 17th, 1907, and was conducted by the Revs. W.E. Robson and E.E. Fisher. A short service was held in our church, and afterwards the remains were interred in the family burying ground, Finchingfield, by the side of her sainted mother, in the presence of a large number of friends who has assembled to show a last token of appreciation and their sympathy with the bereaved.

A memorial service was held in the church she had so well served on the following Sunday evening conducted by the Rev. E.E. Fisher. A large audience was present, composed not merely of members of the congregation, but of strangers who came to show the respect in which our sister was held.

Florrie was the daughter of Rev E Cook Pritchard.