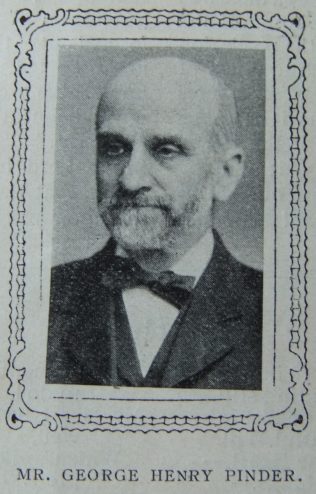 AMONG the spiritual stalwarts whose sterling worth and loyal service have wrought so effectively for the progress and consolidation of our Church, the subject of this brief sketch is justly entitled to a place of distinction and honour.

Mr. Pinder, a native of West Riding, was born at Stocksmoor, near Huddersfield, in 1851. Removing to Ossett in boyhood, he was converted under the ministry of the Rev. J. Calvert, and joined our church in Dewsbury Road when about fifteen years of age. Not only has he maintained an unbroken connection with this society ever since, but it is not too much to say that every department of our Church life has been helped and enriched by his self-denying toil and beautiful spirit and example.

His earliest sphere of service was the Sunday school, in which he has ever taken a keen and intelligent interest, and for many years has been its superintendent. He is also a local preacher of considerable ability, and in this capacity has rendered splendid service to this Circuit. Quite early in his Christian career he was appointed to the onerous and important office of Class Leader, and for more than forty years has worthily fulfilled the obligations of leadership.

It is generally admitted that the growth and prosperity of our Church largely depends upon the vigorous maintenance of the Class Meeting.

Brother Pinder is a firm believer in the value of this institution, and is eminently qualified for the work of ministering to the edification of those committed to his care.

His moral integrity, combined with unfailing diligence and punctuality, inspire confidence: while his deep religious experience and tactful sympathy render him the wise counsellor and trusted guide of young and old.

George was born in 1851 to parents Joseph and Hannah. Joseph was a woollen hand loom weaver.

His obituary records that George responded to the call of God at the age of thirteen.

George was a coal miner.