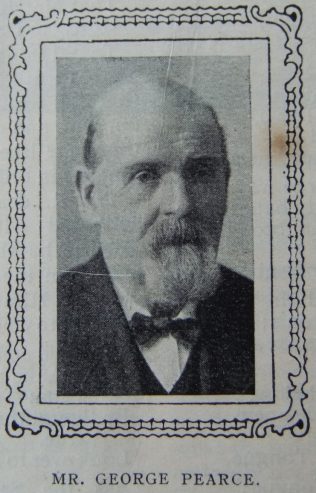 A man who fears God, and hateth every form of evil. Both his master and fellow-workmen esteem him for his integrity, and never hesitate to trust his word and conduct. Not long ago, an unconverted man declared, “ If ever I get converted it will be because of George Pearce, and the place where he worships will be the place for me.” There is no show about him, no lauding of himself as though he were superior to others and wished them to know it, but in meekness he treats others as his equal and as brothers. Kindness and peaceableness are decided traits of his character. It is thirty-five years since he joined the church during some mission services held by the late Rev. Geo. Warner. He was then in the prime of life, being twenty-eight years of age, but the thought of those “wasted years greatly troubled” him, and acted as a strong stimulant to earnest service for Jesus Christ.

Open-air work was his special delight, and often he and a few of his friends would be seen and heard in the streets inviting people to the chapel, and exhorting them to flee from the wrath to come. He was one of the founders of our church at Sunniside in the Houghton-le-Spring Circuit, where a blessed revival took place which resulted in a membership of forty-three, and the quickening of church life in other places in the Circuit. He is also Class Leader, and Superintendent in the Sunday school. The bodies as well as the souls of men receive his attention, and by knowledge of various ills and how to cure them, he has often relieved suffering, and saved one when a doctor was not at hand. Browney Colliery, Brandon Circuit, honours George Pearce.

George was born abt 1848 in Gloucestershire, to parents George and Louisa. George, senior, was a coal miner.

George was also a coal miner. The family moved to Trevethin, Monmouthshire, when George was still young. Later, with a young family, George moved to the Durham coalfields.