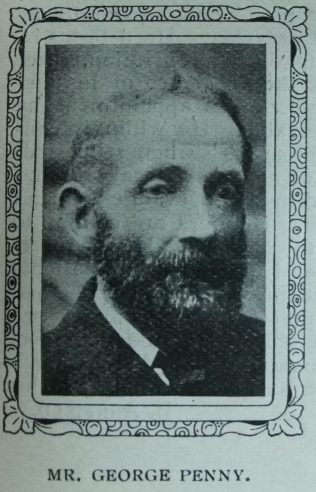 No brother is worthier of a place in our “Local preachers’ Gallery” than Mr. George Penny, of the Salisbury Circuit. Primitive Methodism has few finer types in the ranks of its lay ministry. He is distinguished by the solid qualities of thoughtfulness and earnestness. His outstanding characteristics are simplicity and reality – the natural products of his rural upbringing and environment. He was born and bred in the village of Hornington, and amid its rustic scenes and pursuits the most of his manhood years have been spent. His conversion took place at the age of sixteen, through the agency of our Church, though his mother’s tender intercessory prayers were undoubtedly a large contributing factor in it. After a few quarters’ membership his name appeared on the plan – next to the writer’s – and for a period of thirty-three years now he has served the Circuit as one of its ablest and most successful lay preachers.

His services have also been freely sought by neighbouring Circuits, as well as by the Churches of other denominations. As a preacher Mr. Penny is fresh and forceful – often eloquent – and always interesting and impressive. Preaching is a passion with him; he delights in it; and, in prosecuting his much-loved work, he can ever rely on his devoted wife and children for sympathy and support.

May our brother’s bow abide in strength, and his labours still abound in blessing to men and glory to God.

George was born in 1855 at Hornington, Wiltshire, to parents George and Susanna. George worked the land.

George also worked the land, although by the time of the 1901 census he had been promoted to foreman.

George died in early 1927 in the Salisbury Registration District, Wiltshire.