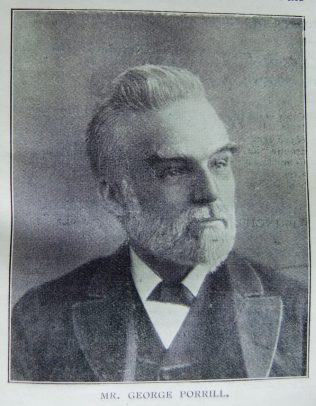 Transcription of Sketch in the Christian Messenger by Wm. Bowran

In connection with our Church in Scarborough, a very fine work has been done during the past four years through the agency of the East End Mission, which has its headquarters at St. Sepulchre Street Church and of which Mr. George Porrill is the resident missioner.

This mission was formed for the purpose of influencing for good the fisher folk and others in the East End of the town, two-thirds of the cost being guaranteed by St. Sepulchre Street Church and the remainder by friends in the town, including Mr. J. Compton Rickett, the Member of Parliament for the borough, who last year gave a donation of ten guineas.

In Mr. Porrill, the committee have secured a capable missioner, who has for many years occupied our pulpits in the Hull, Grimsby and Lincoln and other districts with much acceptance and success.

So long and faithful has been his service that he deserves an honourable place amongst the local preachers in the Connexion worth knowing.

Our friend was born at Burstwick, a small village in Patrington Circuit, on June 4th, 1848. After a very scanty education he left home at the early age of twelve years to enter farm service. Owing to the helpful influence of a Godly parentage and the efforts of his Sunday school teachers, he was early brought under religious impressions, and before he had reached his twentieth year was savingly converted to God. It is interesting to state that it was at Patrington, after a sermon preached by the Rev. Thomas Kendall, uncle of the Rev. H. B. Kendall, B.A., ex-President of the Conference, that young Porrill was led to give his heart to the Lord. The text of the sermon was “The Cross of Christ,” and in the prayer meeting our friend was led by Mr. Kendall to the penitent’s form.

Less than two years after his conversion Mr. Porrill was invited to preach, and soon displayed great aptitude in the pulpit.

Removing to Hull in 1869, he became associated with Spring Bank Chapel in the First Circuit, and a year later with Holderness Road Chapel, in the Third Circuit. For six years he resided in Hull and proved himself very useful in various spheres of church life, and especially as a local preacher.

In 1875 he was invited to give up his regular employment, and thereupon accepted an appointment as a hired local preacher in Grimsby First Circuit. This position he occupied for six years. At first he preached in the pulpits throughout the Circuit on the Sunday, and engaged in mission work in the town during the week, but for the last four years he practically did the work of a minister, taking his turn with the regular travelling preachers in both town and country throughout the Circuit.

Whilst in Grimsby, Mr. Porrill enjoyed the great advantage of working side by side with such saintly men as Thomas Newsome and Parkinson Milson, and he gratefully acknowledges the encouragement and help which he received from them at that time.

After six years of this arduous labour, Mr. Porrill’s health unfortunately failed, and he decided not to seek another regular preaching engagement, but entered into business.

On Sundays, however, he continued to preach, and during the winter months was frequently employed in evangelistic work. In one year he spent nine months as a missioner in Goole Circuit, where he had much success. So appreciative was the Circuit of his labours that at the quarterly meeting of the station in March, 1890, the following resolution was passed:- “That this quarterly meeting desires to record its high appreciation of the character and service of Mr. Porrill, who has been labouring with us as an Evangelist during the past six months. His preaching has been of an excellent and forcible character, his zeal beyond regard for his health, and his devotion of a high spiritual order. He has laboured harmoniously with both minister and officials, and his services have been crowned with success.”

The next year he was, on the recommendation of the Grimsby and Lincoln District, appointed by the General Missionary Committee, to take the oversight of Richmond Mission, in Yorkshire, for twelve months. At the expiration of this period he was engaged as a Hired Local Preacher by Castleford Circuit, and served with great devotion and success for three and a half years. His next Circuit was Leeds Sixth, where he remained the same length of time, afterwards removing to Scarborough, the scene of his present labours.

In this fashionable watering-place he is doing excellent work as a preacher and visitor. From his annual report, we learn that during the past year he had conducted sixty preaching services. In the summer two open-air services have been held every week, and one during the winter months in most of which he has taken a part. He has also rendered assistance to other churches and addressed numerous temperance and open-air meetings under the auspices of the Free Church Council. In addition to regular house to house visitations, he has paid 1,200 visits to the sick and aged during the year.

In referring to his pastoral work, one of his friends says: “He has great tact and meets with a cordial reception even from people with whom he is a complete stranger.

In the sick room his sympathy and religious ministrations have been very helpful to the suffering, and to our own people his presence has ever been welcome, as he has brought sunshine into their homes.”

Mr. Porrill is a capital preacher and has a particular aptitude tor open-air work. Those who heard him at the Conference Camp Meeting, at Sheffield, will be ready to testify that he is a very effective speaker, and can present the truth with clearness and power. Mr. Porrill has twice been elected delegate to the District Meeting, and on two occasions has also been a representative to the Annual Conference.

George was born in 1848 at Burstwick, Yorkshire, to parents Robert and Mary. Robert worked the land.