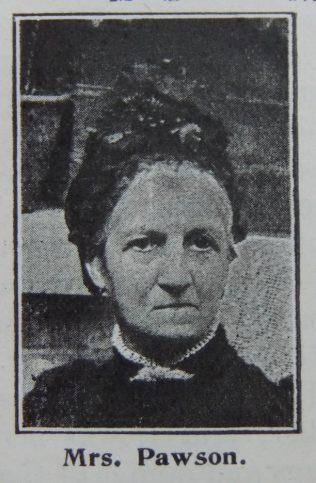 Transcription of Obituary In the Primitive Methodist Magazine by B. Fell

On Jan. 26th, 1901, from Mayfield Street, Hull, the spirit of Mrs. Hannah Pawson ascended to the Paradise of God. Born at Welton, a beautiful village in East Yorkshire, October 4th, 1815, she had reached the ripe age of 85 years. Converted when in her teens, she joined the Wesleyan Methodists, and all her subsequent life proved the realness of the change she had experienced. As a girl she was intensely devout and spiritual. On December 1st, 1842, she became the wife of the late Mr. John Pawson, prominent for many years as an official and earnest worker in the Hull First Circuit, which proved a most happy union. Immediately after their marriage they removed to West Street, Hull where they rendered valuable services until the erection of the Jubilee Chapel, Spring Bank, in 1863. Mr. Pawson finished his earthly work in 1867, and the responsibilities of a family of eight came upon the widow. With exemplary fortitude and faith she faced the new conditions, and with singular success. A true mother, she lived for her children, seeking ever and always their highest interests, alike forgetful of her own case or pleasure, indeed, her life was full of service for others, consequently she made many friends and was held in high esteem by all who knew her.

The writer knew her best in the evening of her life, and a beautiful evening it was. You could hardly realise that she was old. Indeed, she kept young to the last. In appearance she was queenly, a tall, fine figure, still erect as in her youth, with an elasticity of step quite abnormal for her years. It was quite refreshing to converse with her on social and political as well as on religious subjects. We think of our friend as a link with the past broken. But she didn’t live in the past. She was full of sympathy with young life and saw the best of everybody she came in contact with, and so her life was full of sweetness, and bright with a great hope that never failed her. Quite a remarkable old lady was Mrs. Pawson.

Her removal was sudden and somewhat unexpected. She had been unable to attend God’s house for a few weeks through shortness of breath and a slight chest affection, but was moving about in the house as usual until a few hours before the summons came. Then without pain or struggle, almost without a sign of the approaching end, she closed her eyes to earth and opened them in heaven.

And so a pure beautiful life passed into the unseen, though not uncertain future. If ever one was ready for God’s call to the higher service our Sister Pawson was ready. There was about her an atmosphere that was other-worldly, though she lived in such sympathy with all about her. To know her and converse with her was a rare privilege. She knew her Bible, she knew God, she knew the secret of abiding union with Jesus Christ. She knew and realised the power of prevailing prayer. Her removal is a rare loss to the Church, and she held the unique position of being the oldest member on the Church roll at Jubilee. That the family may be sustained and comforted and meet again in the Home Beyond is our earnest prayer.

Hannah was baptised on 8 October 1815 at Welton, Yorkshire. Her parents were Richard, a shoemaker , and Elizabeth.

Hannah married John Pawson (abt 1820-1867) on 1 December 1842 at Welton. In 1841 John was an apprentice shoemaker living at Welton, although he was born at North Cave. In 1851, John is described as a grocer and general dealer. By 1861 he was specialising as a china and earthenware merchant. Hannah continued that business following her husband’s death.