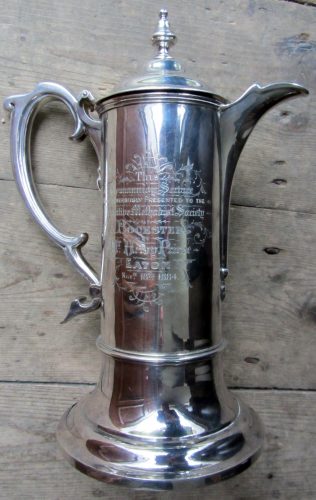 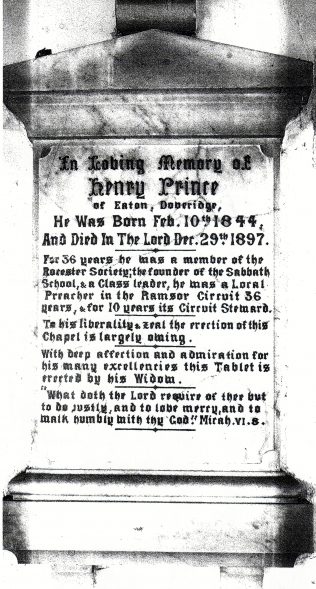 The earliest known deed entrusting a chapel to duly appointed Trustees, was drawn up for the first Primitive Methodist Chapel in Rocester. Its Indenture, dated 16 July 1813, bears the signatures of nine Trustees, including James and Hugh Bourne. However, towards the end of the century, the Trustees decided that the Chapel was too small for the growing congregation. One of the Trustees involved in the construction of a new Chapel and Sunday School was Henry Prince, a local farmer who had been born in Rocester but whose family moved to a farm in Marston Montgomery, when he was nine. In his twenties he started farming on his own and he finally took up the tenancy at Eaton Dovedale, two miles from Rocester.

Henry Prince was converted to Primitive Methodism when one of his father’s farm-workers suggested that the 16-year-old should attend the Primitive Methodist Chapel in nearby Roston. From the age of 17 he was a member of the Rocester Society and became a Local Preacher. Both he and his younger brother, John Prince, were listed in the Ramsor Circuit Plan. Henry was soon well-known both within and outside the Ramsor Circuit for his generosity and diligence. In 1870 he travelled a total of 650 miles on horse-back to preaching assignments. He was a Class Leader and for 10 years the Ramsor Circuit Steward.

The twenty-five Trustees of the new Rocester Chapel included all three Prince brothers: Henry, John and George. Henry Prince bought and donated a piece of land for the new Chapel on the opposite side of the road to the old Chapel. He was asked to lay a memorial stone on behalf of the Sunday School which he had founded; the stone is still located in the buttress near the school door. In a recess behind the rostrum were two large marble tablets engraved with the 10 commandments and a smaller one saying they had been given to the Trustees by Henry Prince.

The new Chapel was opened as planned on 21 Jan 1889. The proceedings commenced with a last service in the old Chapel, followed later by the first service in the new Chapel. The silver-plated communion set presented by Henry Prince to the Primitive Methodist Society, Rocester, on 18 Nov 1884 will probably have moved from the old to the new Chapel on that day. The old Chapel was sold later that year and converted into two cottages.

In February 1890 Henry Prince and Ann Archer married at Mount Zion Chapel, a Primitive Methodist chapel in Woodhouses, Yoxall. Ann Prince soon joined in the fund-raising activities of Rocester Chapel, providing teas and organising events. At the end of 1897 Henry Prince became increasingly ill and died after a couple of months.  His wife put up a tablet to his memory inside the Chapel. Henry Prince had been re-elected each year as Treasurer and she was asked to take her husband’s place as Treasurer, which she did for one year.

Some time after her husband’s death, Ann Prince moved to Barton-under-Needwood, where for the next eleven years she was active in the Primitive Methodist Sunday School and Band of Hope.

When Henry Prince died, his nephew, John, the nineteen-year-old son of John Prince, took over Eaton Dovedale Farm. He and other members of the Prince family were involved in the running of Rocester Chapel and Sunday School for a large part of the twentieth century. However, following a decline in the congregation, the Chapel was purchased in 1986 to be used by the Birmingham University Field Archaeology Unit which, after establishing a museum there, later sold the building. A key feature of the Chapel according to the online sales brochure was the “Abundance of Stained Glass Windows”.

When the Field Unit first inspected the Chapel, the pews and pulpit were still in place. It is unknown what has now happened to the tablets indoors, but the memorial stones around the outside of the building are still legible. The communion set donated to Rocester Chapel in 1884 by Henry Prince disappeared for several decades, though members of the Prince family knew of its existence. However, thanks to the perspicacity of members of Englesea Brook Museum who noticed that it had recently been put up on-line for auction and were aware of its significance, the communion set can now be admired at the Museum.