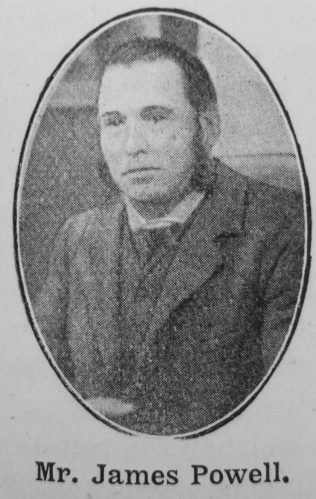 Transcription of Obituary in the Primitive Methodist Magazine by George Sayce

The subject of this memoir, the late Mr. James Powell, of Cwm station, Herefordshire, was a son of Thomas and Elizabeth Powell, of Snodhill, Peterchurch, and a brother of the Revs. Thomas and William Powell, of the United Methodist Church, Queensland. Deceased’s parents were Primitive Methodists, and always manifested a keen interest in the work and welfare of the circuit.

Mr. James Powell received the advantages of the teaching and training of a Christian home during the early and formative period of his life. In youth he was quiet and peaceful in disposition, thoughtful and reflective in mind, and retiring and reserved in manner. He was brought into the glorious realisation of spiritual life at the early age of seventeen. He was led to Christ through the ministerial agency of the Rev. Samuel Peake, who was particularly characterised by saintliness of life and supreme devotion to the great work of saving men. Having first given his heart to God, Mr. James Powell immediately extended his hand to the Church.

This beginning of confidence in the Divine will was steadfastly maintained by him till the triumphant end. He was broad in moral sympathy, large hearted, generously disposed, and was always prepared to say, “Grace and peace be with all who love the Lord in sincerity and truth.”

The revered circuit steward’s benevolence to the church of his early choice, or to any case of human need, won the esteem and admiration of his fellowmen. Whilst he was a man of strong mental parts, of sound judgment, his intuitive faculties being good, and his mind evenly-balanced, it was his great-heartedness that dominated him, and enabled him to evince a tender and passionate regard for those associated with him by social or Christian affinities. Thus he won the love and confidence of all who knew him in public and private life. He occupied an official position in the Church, being a local preacher, and, for seventeen years, was the station’s circuit steward. He upheld this office in a manner that reflected the highest credit upon himself, and took a keen interest in the churches of the circuit, and everything pertaining to Primitive Methodism till the time of his affliction, and subsequent incapacity. Mr. Powell was a member of the District and Sunday School Committees, and, on several occasions had been elected to represent Cwm circuit as a lay-delegate at the West Midland and South Wales District Meetings. But to know him in his best moods and moments would be to see him either in the centre of his home, surrounded by his affectionate family, or in the circuit official meetings with his brethren, by whom he was so highly esteemed and beloved.

He became the subject of an affliction that greatly prostrated him, and was ultimately confined to his bedroom. Through the kindness of those in whose hearts were found so much love for him, and whose hands never tired of ministering to his necessities, aided by the best medical skill, he rallied for some time, and hopes were entertained of his recovery. But, unfortunately, he went from home one day and on returning his friends thought he must have taken cold, for there came a relapse. He was again confined to his room, and sank more rapidly than before. Although every possible means was adopted to prolong life, and avert the inevitable, he, after suffering patiently with Christian fortitude and resignation, “crossed the bar.” The great gate of mystery, opened unto him the clearer visions and the fuller joys supernal, found in the glorious presence of the Divine Redeemer and Lord. This change took place on April the 6th, 1901, in the 59th year of his age. His remains were interred at Peterchurch graveyard – the family burial-place – and a memorial service was subsequently held at the Primitive Methodist Chapel, Ewia’s Harold, when the congregation was large, the service most impressive, and sympathy expressed on every hand for the sorrowing and bereft family, and especially among the members of the church of which he formed a part, being not only a member, but a valuable friend and helper. “Truly the memory of the just is blessed,” and “precious in the sight of the Lord is the death of His saints.”

James was baptised on 27 December 1842 at Eskley, Herefordshire. His parents were Thomas, a farmer of 155 acres in 1871, and Elizabeth.