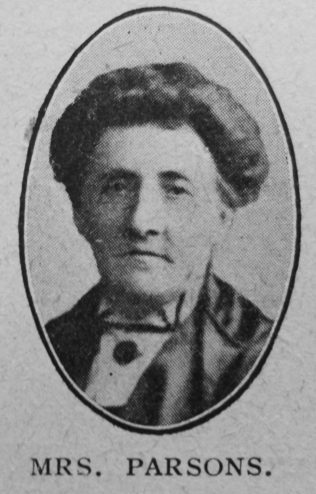 Transcription of obituary published in the Primitive Methodist Magazine by G.W. King

Mrs. Parsons, the wife of the Rev. E. Parsons, Seaham Harbour Circuit, was called to the Homeland on Saturday, February 22nd, 1919, and on the following day her husband received the summons, and obeyed the call. The double event came with tragic suddenness, casting a gloom over the district, and evoking widespread and deep sympathy for their son and daughter. The interment took place at Mere Knolls Cemetery, Sunderland, on Wednesday, February 26th, after impressive services in the Tempest Place Church, Seaham Harbour, and Tatham Street Church, Sunderland.

Mrs. Parsons was a native of Sunderland, the daughter of Captain and Mrs. Brown, highly respected members of the Tatham Street Church. At an early age Miss Brown joined the Church, attended regularly the Society class, was a Sunday school teacher for many years, and actively engaged in other departments of the Church. Mr. Parsons and she became engaged during a mission he conducted in the Sunderland Circuits when an evangelist in Mr. Odell’s home, Birmingham, and on the completion of his ministerial probation on the Melbourne Circuit, Australia, were married in the Melbourne Church.

In 1902 they returned to England, and travelled on the Brinkworth, Leamington Spa, Tipton, Brierley Hill, and Seaham Harbour Circuits. A better choice of a partner Mr. Parsons could not have made. In every respect she, was suited to him, and made an ideal minister’s wife. Her home was a haven of rest—cosy, comfortable, and happy. She generated an atmosphere there that was truly Christian, and helpful to a minister. She did not engage in public work to any great extent, but her quiet, gentle, gracious manner contributed to the preparation of her husband for his public ministries. Never physically strong, yet her ministry in the home and Church was a great and saving ministry. A pure, sweet, and loving wife and mother indeed she was. She made home a happy place, and both husband and children were proud of her. We are glad to state that at the last Conference their son began his ministry in our Church.