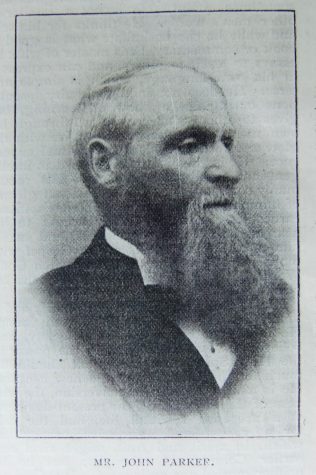 Transcription of Sketch in the Christian Messenger in the series ‘Local Preacher Worth Knowing’ by H.Y. (probably Henry Yooll)

MR. JOHN PARKER, whose accompanying portrait is given, is a good type of the North of England local preacher, and is at present serving as a hired local preacher in South Shields Circuit in the absence through illness of Rev. T.E. Currah. He was born in 1842 at West Cramlington, Northumberland, but removing in his childhood into Durham, he has spent the greater part of his life in the latter county. He is the child of honoured parents both now in Heaven. His father was a staunch Primitive Methodist for 56 years, and for half a century exercised his gifts and graces as a local preacher. His name is fragrant in the North, for he did yeoman service, and was a singularly attractive and saintly man. Mr. Parker‘s mother died earlier, but she was a consistent and useful member of our Church for 40 years. Our brother thus is happy in his parentage, and nobly has he preserved the sacred traditions and earnest spirit of his early training. To his parents under God he owes his first religious impressions which ripened into decision for Christ and the Church in his 19th year at a service at Easington Lane. Mr. I. Daglish, a fine specimen of a notable race of lay preachers at that period, was the preacher on the occasion, and our friend often refers to him in terms of admiration and affection.

Mr. Parker has exercised his local preachership since the year 1867, and is well-known and greatly esteemed in our northern districts. He has divided his time almost equally between the occupation of mining and evangelistic labour. His gifts were soon recognised not only by his own circuit but by his district generally. Hence, in addition to the ordinary duties of his circuit plan, he has been frequently called upon to leave his secular toil at the bidding of other circuits and betake himself to the work of special missioner. In this respect he occupies an almost unique position in the North, and one is almost instinctively inclined to dub him ‘Rev.’ In labours he has been most abundant and has had remarkable success, both as ‘Evangelist’ and ‘hired local preacher,’ in Durham, Northumberland and Yorkshire. On the banks of the Tyne, the Wear and the Tweed he has been much in request; there are indeed, few of our circuits in Northern Primitive Methodism in which he has not seen ‘the hand of the Lord made bare’ and the kingdom of our Lord extended. He has also had a happy engagement in Motherwell, Scotland, where his work was much appreciated. In the wide extent of his labours he has gained a large and varied experience and his faith has often been put to the trial, but results have only confirmed his confidence in the gospel and in the power of prayer.

One example out of many may he cited. He says ‘I remember when at Leasingthorn, (Shildon Circuit) for a few nights we had a hard struggle. The church was low and members few. An old lady – a Mrs. Bowman – asked if we would pledge ourselves for special private prayer. We did so, and for four nights it was apparently a hopeless outlook, but the night after, I was surprised to see the chapel full, and just as I announced my text ‘Who then is willing?’ one of the worst men in the village cried out ‘Me’ and came out. I never preached that night. Before we closed the mission 60 souls came out for the Lord.’ Thus did God honour faithful prayer and perfect His strength in our weakness.’ Mr. Parker can entertain and edify his friends with the recital of many incidents of a like order. God has blessed his labours in the salvation of at least a thousand souls.

It is a tribute to his genuine worth that, in the circuits where he has resided at his ordinary occupation, viz., Hetton, Houghton-le-Spring, and Wingate, he has been greatly used of God in Evangelism, and that the fruits of his work are acknowledged to be rich and abiding.

Intellectually Mr. Parker has made good use of his opportunities. His reading may not cover a wide range, but it has been solid and select. His manner of preaching is in the main expository, but often original and sometimes quaint. He is not a retailer of other men’s words. He thinks for himself, and while he can assimilate what is good in book or commentary, he is master of what he essays to teach to others, and can express it in his own language, which is simple and terse. He does not indulge in airy speculations or attempt a show of learning, but gives to others what has passed through his own mental processes, and is alive with the glow and reality of his own spiritual experience. He is thus in the best sense an intelligent and impressive preacher. His robust manly common sense and occasional gleams of humour, suffused with an intense spiritual earnestness, give him ready access to his hearers’ hearts and consciences, and enable him to clothe the truths of the Gospel with those sympathies and aptitudes which God’s Word claims at the hands of those who aspire to preach it.

Mr. Parker has a genial personality and a kindly bearing to all, both old and young. He is a member of the C.E. Society, and believes that, wisely led and in the power of the Holy Spirit, that movement should do much for the Churches of the new century. He is a firm believer in conversion, the witness of the Holy Spirit, the present-day need of a deepened spiritual life, and the call for a robust and aggressive evangelism which, in spirit and fruit, might rival our earlier Connexional triumphs; but he is neither morbid nor antiquated. It strikes us as matter for consideration in view of such Christian workers as he, and the solid value of the good done by his frequent calls to missioning, whether, as a Connexion, we have done and are doing what we could and ought in developing the possibilities of lay evangelism. That men of Mr. Parker’s type may largely increase is our earnest prayer. Gains of no greater value can enrich the Church.

John was born in 1842 at West Cramlington, Northumberland, to parents William and Mary. William was a coal miner.